As we all appreciate the changing of the seasons, have you ever wondered why leaves change colour in autumn? Autumn colours are the result of chemical reactions that occur as the leaves of deciduous trees die.

In summer, the trees use the green chlorophyll in their leaves to produce food from sunlight through a process called photosynthesis.  As summer ends, the cooler weather and shorter days trigger them to stop producing chlorophyll.  Other pigments can then become prominent.  Carotenoid turns the leaf a golden yellow and anthocyanin produces a red hue.

Different species of trees contain varying amounts of these pigments, causing different shades of yellow, orange and red to be produced. British native trees tend to turn golden rather than red, with many of the most colourful autumn leaves produced on imported trees, such as American and Japanese maples.

The colours are not the same each year with environmental factors affecting the production of the pigments.   A dry summer increases anthocyanin production leading to better reds and bronzes.  Windy weather shortens the show, giving you lots of leaves to sweep up, whereas settled weather with cool nights prolongs it. 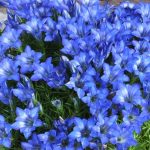