The catkins or lamb’s tails of the male Hazel, Corylus avellana, are prominent as the bushes are not yet in leaf. The smaller female catkins become nuts after being pollinated by the wind. Hazel was traditionally cut over or coppiced to produce rods. The flexible wood could be formed into spars, stakes, hurdles and furniture as well as firewood.

Hazel nuts attract many forms of wildlife, most notably squirrels.  Cultivated forms of hazel were selected for their nuts or cobs though some are hybrids with the closely related filbert.  Hazel was supposed to protect against evil spirits and water-diviners use it for their wands.  In medieval times it was a symbol of fertility.

‘Harry Lauder’s walking stick’ is a hazel with twisted stems. The twist is said to be due to a virus. First found in a hedge in Victorian times*, the first garden plant came from a cutting planted in what E A Bowles called the ‘Lunatic Asylum’ at his well-known garden at Myddelton House, Middlesex.

*I am reliably informed that the twisted hazel was first discovered in a hedgerow at Frocester, near Stroud in Gloucester in 1863. 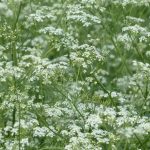