Diary of an Orkney Gardener – Start of August 2018

As August arrives I can’t believe that half of the year has already passed by.

Here in Orkney the nights are beginning to draw in – mind you it is still light at 10pm and dawn breaks around 3pm so I am not suffering from light deprivation just yet. Needless to say, the garden and the weeds are still making the most of our short but abundant growing season. 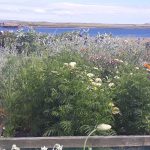 Veggie patch with cornflowers, poppies and borage growing amongst the peas and beans

2018 has been full of seasonal extremes. A very cold and exceedingly wet winter resulted in the garden being about 6 weeks behind, followed by a sunny, warm abundant May and early June with the garden attaining its luscious best ever.

Hector put a stop to that, devastating everything in its wake and the gardens chance of recovery seemed slim. The six, relatively windless, weeks of lovely warm temperatures and low rainfall which followed allowed the garden to not just repair itself but to put on an astounding amount of growth (even the trees grew brand new leaves). 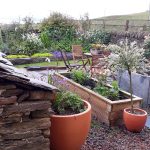 The courtyard garden has recovered from Hectors ravages

Two years ago, I pruned the black currant bushes and used the cuttings for pea sticks. They rooted themselves and this year I have already picked 4llbs of fruit and I haven’t started on their parents yet!

The David Austen roses in the courtyard garden have been full of blooms and the fragrance of ‘Desdemona’, ‘Roald Dahl’ and ‘Gertrude Jekyll’ has been a delight as the good weather has allowed us to enjoy several al fresco garden lunches. 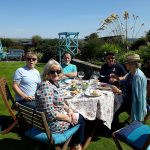 Enjoying lunch in the garden

The Inula repaired themselves after being snapped in two in the gales of June and although not in flower yet look healthy and strong.

The Orkney geranium garden has been much admired and Alan Bremnar, who bred the geraniums, is a regular visitor to The Quoy. Who knew identifying geraniums could be so much fun?

Four more new additions to the collection are gaining strength in the ‘potter’ and although ‘Dilys’ is looking dodgy after her travels from Norfolk, I am ever hopeful that new growth will emerge in the coming days.

As I type the wind is gathering strength once more, its time to hop back on the horticultural tight rope once more and hope that Kevin has got the wind fences back in position in time to save my precious roses… 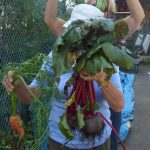 Mad Dogs and Allotment Folks go out in the Midday Sun!!Allotment, Blog 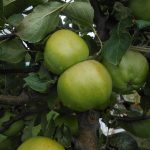