Holly is strongly associated with Christmas, featuring on many a Christmas card. With its spines and blood red berries, the plant had religious significance to early Christians.  Prior to that, the Celts held the holly and the oak as the two most important trees and the Romans featured holly in their Saturnalia events.

Most holly trees are either male or female; important to know, as only the female plants carry berries. Some garden forms are better than others. ‘JC vanTol’  and ‘Pyramidalis’,both varieties of Ilex aquifolium,  are both self-fertile and good for berries but do have rather plain leaves.  Contrary to legend, a good berry crop does not mean the tree can anticipate a hard winter but, rather, reflects the amount of sun earlier in the season. Variegated hollies tend to have fewer berries. One variegated holly named ‘Golden Queen’ is, confusingly, male!

Holly, along with other native plants, such as ivy, were used as decoration in the home but are less so now that other plants, such as bright red poinsettias, are available.

Robins, which used to be called Red-breasts, are also often seen on Christmas cards, possibly as Victorian postmen wore red jackets.  In winter all Robins sing to defend individual territories, so ‘Cock Robin’ may actually be a hen. Some of the robins appearing in Scotland in winter will have crossed the North Sea earlier in the autumn. 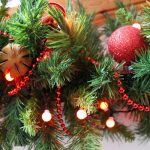 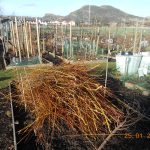 A chilly day on the AllotmentAllotment, Blog, Fruit trees, Workshops