Blackthorn, Prunus spinosa, is distinctive with white flowers against black branches that do not yet have leaves. The plant typically suckers to form thorny thickets.  The Cherry Plum or Myrobalan, Prunus cerasifera, starts to flower even earlier but has some leaves on greener twigs. It is often used in hedges and a purple leaved form is common in gardens.

Later in the year Blackthorn carries purple fruit which give its alternative name of Sloe. Sloe gin is traditionally made from fruit picked in autumn after the first frost. Each berry is pricked -traditionally with a thorn from the bush- and a jar is filled halfway with the berries. Gin is added along with sugar and further flavour comes from cloves or cinnamon.  A well-known brand of cider is named after Blackthorn but, of course, is made from apples.  The Cherry Plum has red fruits. Blackthorn is also traditionally used for making walking sticks.

N.B. I must apologise for how late this is – Stan sent it to me almost a month ago and I forgot to post it. Still, better late than never! Julie 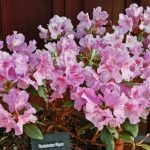 Dwarf rhododendrons:  the birds and the beesBlog, In flower now, Plants in Season