It’s busy on the allotment..

Thursday morning was generally sunny and warmish. The ground was fairly dry so the rain coming later in the day was very welcome. The warm weather of the past few days had brought a big change to the plot with the blossom out on the cherries and plums, and the blackcurrants, redcurrants and gooseberries showing promise of a heavy crop.

The grass had its first cut of the year and the team had a picking of rhubarb and the first of the asparagus was cut. There are only 3 asparagus plants left after so many bad winters, so once the corpping has finished the ground will be used for another crop. The asparagus variety – Guelph Millennium – was recommended for cool climates but it hasn’t managed to sustain its initial promise on our site.

May is the busiest month of the year for sowing and planting and today the potato bed had the last of the varieties planted with maincrop potatoes – Highland Burgundy, Cara and Pink Fir Apple.
Three rows of carrots were sown in the bed prepared last week – Early Scarlet Horn, Amsterdam Forcing and James Scarlet Intermediate, and three rows of beetroot – Long Blood Red which is a heritage variety from Garden Organic, Red Ace and Barbabietola di Chioggia – a delicious traditional Italian variety with white rings.
Peas – Lincoln and Rondo – were planted out and the heritage variety of Broad Bean – Gloucester Champion; all had been grown on in pots and seeds will be planted too to give succession.

Biochar trial
This year we are taking part in a trial of biochar. The Whitmuir Project has obtained funding from the Climate Challenge Fund to collect woody waste from the local community and turn it into biochar using a special kiln and to demonstrate to the community the potential benefits. The Caley has two plots at the project which is based at Whitmuir Farm, two plots in the Demonstration Garden at the Royal Botanic Garden Edinburgh and now plots on the allotment.

Biochar is charcoal but produced at a lower temperature than barbecue charcoal so it has micropores which provide habitats for beneficial soil microbes and which hold moisture. The potential value of biochar will be shown by weighing the produce obtained and a visual record of plant growth. 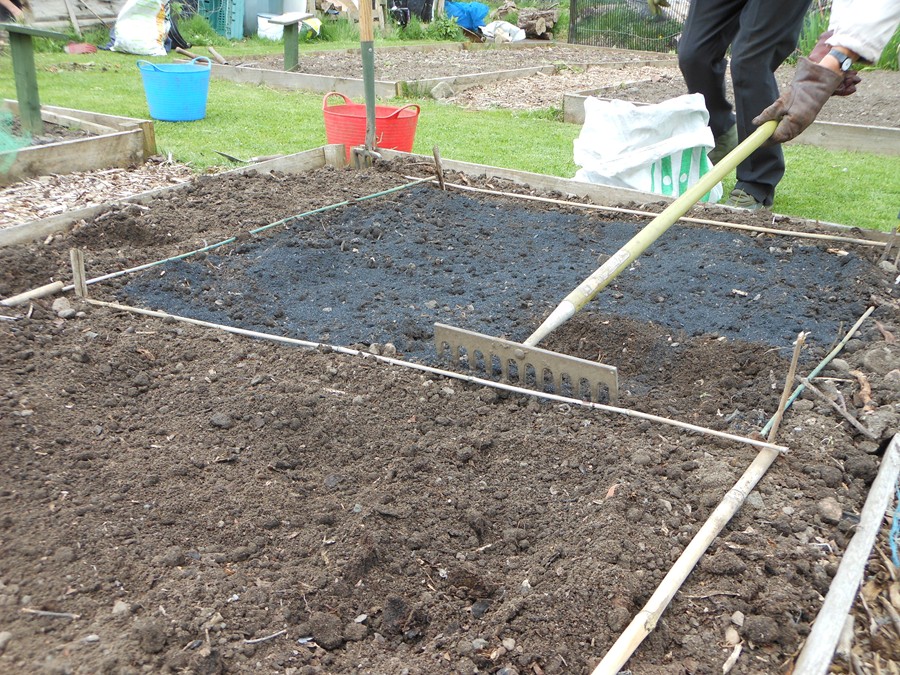 At Bridgend, the Caley allotment site, we have taken one bed and divided it into two 2m x 1m areas. One section has been spread with biochar and the other will be the control section – planted with the same veg but no compost or fertiliser has been (will be) added. Biochar was spread at the rate of 2 litres per square metre and raked in. We planted both sections the same with two rows of maincrop potatoes – Sarpo Mira – and two rows of onions, and we shall monitor the plant growth, health and productivity of each bed. A green vegetable will also be planted.

We have also set up two, metre square, pallets as part of the trial – one with biochar and one without – and are growing salad crops in these which may show more immediate results.

Biochar was also spread on half of the Glen Ample raspberries to test its effect on woody fruit. 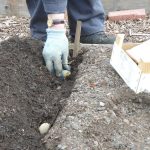 First Thursday in May on the allotmentAllotment 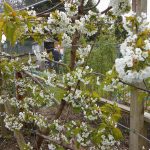