Midsummers day on the allotment

Midsummer’s Day today though you wouldn’t think it, the rain was light to start with but by lunchtime we had had enough.

However we still made progress with weeding, especially the onion bed, and the willow patch where a lot of thistles had grown among the potatoes. The Swiss chard was planted out, succession sowing of beetroot and purple Milan turnips done, some of the runner beans hadn’t survived so replacement seeds were put in and fleece was put over the dwarf French beans to give them a fighting chance. The parsley plants – curly and flat Italian varieties – were planted out in the raised bed beside the other strawberry variety – Elegance.
All the vegetable sowing is done now. All that remains is to put in some annual flower seeds once the outside borders are weeded. Generally from the start of July we begin to enjoy the benefits of the months of work and start and enjoy the fresh veg, but it may be later this year due to the cold and cloudy weather. 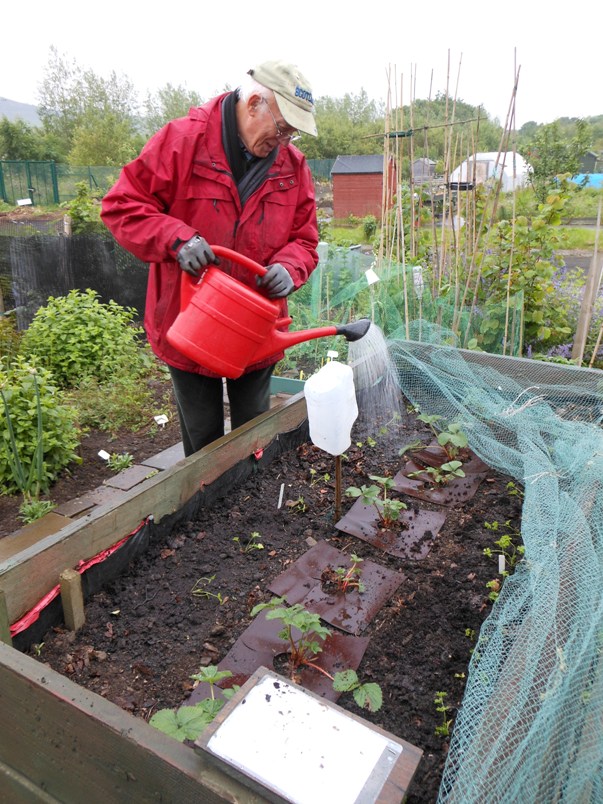 We did another taste test with the strawberries and had a 50/50 split between Symphony and Gariguette – more testing needed.
The rhubarb variety Raspberry Red is cropping wonderfully giving a large number of bright red, slim sticks. A further two new varieties have been planted this year – Valentine and Stockbridge Arrow – we do like rhubarb.
We have had an interesting visit from some animal – a large amount of soil has been excavated and piled up alongside the edge of the green manure bed, and between the annual rye grass and the agricultural mustard there is a large hole. The bed is netted so the beastie must have pushed its way in along one edge but no signs of damage to the netting or crops. It is probably a fox burying something but a very neat and tidy fox. We need a webcam!
The ‘Beechgrove’ BBC TV program tonight mentioned strawberry plants just out the cooler for planting now for later crops. The variety Elegance which we planted a couple of weeks ago is a similar one so we can look forward to some later fruit – weather permitting since ours are outside, not in the greenhouse.
Following George Anderson’s example, we shall also cut back on the new growth on the gooseberries and currants so all the energy of the plant goes into ripening the fruit.
Jobs for next week
Continue with the weeding
Summer pruning of gooseberries and currants Another day of mostly rain at the allotment…..Allotment