Alan began working in horticulture for the Edinburgh Corporation aged 16 and soon went onto study the subject at Auchincruive, albeit with slightly less than perfect attendance. During his studies in Ayrshire, he was fortunate enough to get a place on a ‘sandwich course’ at Culzean Castle and was kept on there as Head Gardener. After a motorbike accident he took a gardening job at Holyrood Palace with day release study for City & Guilds at Elmwood and from there returned to Auchincruive to finish what he’d begun 10 years previously, his National Diploma in horticulture, closely followed by his HNC in Arts and Leisure Management. Soon he pursued his interest down a more specialist path, taking a post with Thrive (then the Society for Horticulture Therapy) in 1987, a fulfilling role helping groups set up projects that used gardening as a vehicle for health and community benefit. This programme became Horticulture Therapy Scotland and when funding was withdrawn, Alan set up Community Gardening Projects Scotland with Ann Jepson. After a spell teaching English in Spain, Alan returned to Scotland where he became involved in another Thrive initiative, becoming a founding member and Chair of Trellis, steering the charity through its formative years from 2006 until 2020. At this time he was also a Greenspace Development Worker for an Edinburgh Community trust, focusing on the Burdiehouse Burn Project. His dedication to therapeutic and community gardening has allowed many high impact projects to come to fruition

Eventually, he came full circle to work for Edinburgh City Council once more, managing some of the city’s most popular greenspaces and introducing sustainable perennial planting schemes. He became a Royal Caledonian Horticultural Society Council member and had a pivotal role in the Saughton Park development work. Retirement from ECC in 2021 has not meant retirement from horticulture, on the contrary, Alan has taken on two allotments in the capital, spends a lot of time helping fellow allotmenteers to learn about gardening and is developing his garden in Murcia, Spain. 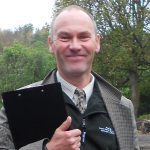 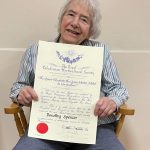