Jamie is a NTS apprentice, currently working at Branklyn Garden in Perth, where he has shown a tremendous aptitude for the role.  Despite the challenges caused by the Covid-19 restrictions, Jamie shown great willingness to play his part in all that pertains to running a garden. Through his work at Branklyn, he has developed a passion for alpine plants and is always keen to expand his knowledge by attending lectures and making visits where possible. He has embraced every opportunity given to him to expand his knowledge of horticulture.

Jamie has also been given some extra responsibilities, including the role of acting Registrar of the Plant Heritage Meconopsis Collection as well as devising a method of supporting a bank with an alternative to peat walls as NTS prepares for a peat-free era.

He maintains clear records of his work and all the plants he has handled.

Jamie also attends SRUC Oatridge Campus on a block release basis where he has proved to be a hardworking and enthusiastic student who is popular with his peers. He is developing into a very capable young professional gardener who is always happy to share his acquired knowledge with others. 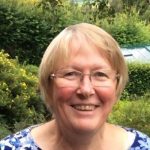