Sex and the single dandelion

As the daffodils start to fade dandelions provide another flush of bright yellow though the plant is less welcome in gardens. The dandelion is a common colonizer of disturbed habitats.

Each flower is composed of at least 50 little florets. A succession of flowers is produced over the year. Our ones mostly set fertile seed without being fertilised (apomixis ) so a single plant can still reproduce effectively cloning itself (In southern Europe sexual reproduction is more common ). They do this so successfully they can occur in vast numbers.

Wind spreads the seed and once established the taproot is very resistant to attempts to eradicate it; any pieces of root left in the ground can regrow.

The plant grows from a basal rosette which can be difficult to remove from lawns and paths.

The name dandelion comes from the French dent de lion, lion’s tooth, from the plant’s jagged-edged leaves. The name wild endive shows it is edible and it can been used in salads and teas . Medicinally it is best known as a tonic or diuretic –the old name cankerwort suggests other uses. The flowers provide useful early food for bees while the seeds are eaten by many small birds.
Native to Eurasia, it was originally imported to America as a food crop. It is now naturalized throughout North and South America, southern Africa, New Zealand, Australia and India. 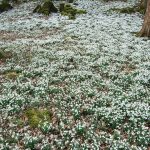 SnowdropsWild Flower of the Week