We are now well into autumn and rowans (Sorbus aucuparia) are laden with their red berries.  The tree is native to Britain. It is also known as the mountain ash because of its leaves which are similar to ash (Fraxinus excelsior), but the two species are not related. Mature trees can grow to 15m and live for up to 200 years. The seeds are dispersed by birds. Rowan is commonly found in the wild, particularly in the Highlands of Scotland, but it is also widely planted as a street or garden tree.

Flowers are borne in white clusters which develop into the scarlet berries. Each flower contains both male and female parts, so all rowans bear berries. The leaves are eaten by caterpillars of a number of moths. Flowers provide pollen and nectar for bees and other pollinating insects, while the berries are a source of food for birds, especially blackbirds, other thrushes and occasionally waxwings.

The rowan has been associated with magic and witches. Its old Celtic name is ‘fid na ndruad‘, which means wizards’ tree. In Ireland it was planted near houses to protect them against spirits, and in Wales rowan trees were planted in churchyards. Cutting down a rowan was considered to bring bad luck in Scotland. In Greek mythology Hebe, the goddess of youth, dispensed ambrosia to the gods from her magical chalice. When she lost this cup to demons, the gods sent an eagle to recover it. The drops of blood which the eagle shed in the fight with the demons fell to earth, where each of them turned into a rowan tree. In Norse mythology it was the tree from which the first woman was made (the first man being made from the ash).

Rowan’s old Gaelic name was Luis from which the place name Ardlui on Loch Lomond may derive. The more common Scots Gaelic name is caorunn (pronounced choroon, the ch as in loch), which crops up in numerous Highland place names such as Beinn Chaorunn. Rowan was also the clan badge of the Malcolms and McLachlans.

The rowan is sometimes used in furniture or craftwork. It was used for stirring milk to prevent it curdling, and as a pocket charm against rheumatism.  Rowan twigs were used for divining, particularly for metals. Rowan berries are edible; sour but rich in vitamin C and can be used to make a jelly. As well as wine, Scots made a strong spirit from the berries. Today rowan berry jelly is still made in Scotland and is traditionally eaten with game.

In gardens rowan can be susceptible to fireblight and may be affected by silver leaf disease. The berries of the native rowan attract birds which often strip them by early autumn; some gardeners prefer to plant Asian rowans with white, pink or yellow fruit as birds are less likely to eat them.

HeatherWild Flower of the Week 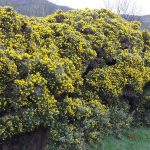