The Queen of the May

Hawthorn, Crataegus monogyna, is common in hedgerows, wood edges and scrub as it will grow in most soils. The flowers are scented, white or occasionally pink, and grow in clusters. They attract a variety of pollinating insects, then develop into the familiar red haws. The haws are valuable food for birds and other wildlife. They can also be made into jellies, jams and syrups. The petals are also edible, as are the leaves if picked when still young and tender. Herbalists used hawthorn to treat cardiac problems and it seems it has antioxidant properties.

It is a popular hedge plant as its spines and close branches make it stock and human proof with regular cutting or laying.

The idea that hawthorn was the source of Jesus’s crown led to the superstition that bad luck followed anyone uprooting a hawthorn. It is unlikely that it grew in Palestine.  European folklore claimed it was deadly to vampires, and stakes used to kill them were made from thorn wood. In Gaelic folklore, hawthorn, Sgitheach, marks the entrance to the otherworld and is associated with the fairies.

The saying ’Ne’er cast a cloot til May be  oot’  warns country people not to shed warm clothes before summer has fully arrived and the may (hawthorn) blossom is in full bloom. Also known as the Queen of the May, it is said to the only British plant named after the month in which it blooms. Using the flowering branches on May day is a very early custom. Since the Gregorian calendar was introduced in 1752, the tree was rarely in full bloom in England before mid-May. In Scotland it often did not flower until June, though this is now changing with a warmer climate.

Various hybrids and cultivars exist, some of which are used as garden shrubs, including the popular ‘Paul’s Scarlet’ with dark pink double flowers. 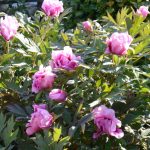 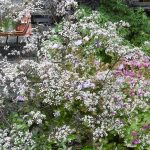