When it’s a pelargonium of course! Pelargoniums are marginally hardy plants from dry areas in Southern Africa, often used in summer bedding schemes, while true geraniums are frost hardy native plants in many parts of Europe, including the British Isles.

There are several types of hardy geranium native to Scotland. All of them have attractive flowers which provide nectar for many insects.  They all grow easily in dry situations, so are good for walls or between paving stones in gardens. Some of them compete well with grass in a wildflower meadow.  The seed pods look like birds’ bills, hence the name cranesbill. Meadow Cranesbill is the wild blue geranium, Geranium pratense, which grows tallest – it can  grow up to three feet. The similar, but smaller, purple Geranium sylvaticum is found around woods. 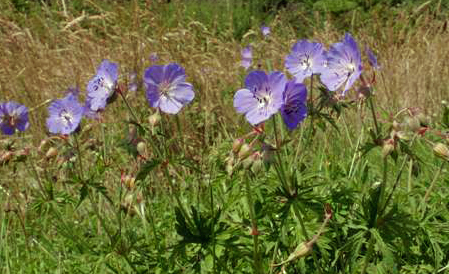 One of the most attractive wildflowers of sandy coastal grassland is the Bloody Cranesbill, G. sanguineum. The small and sprawling annual Herb Robert, G. robertianum, is happy in shade. 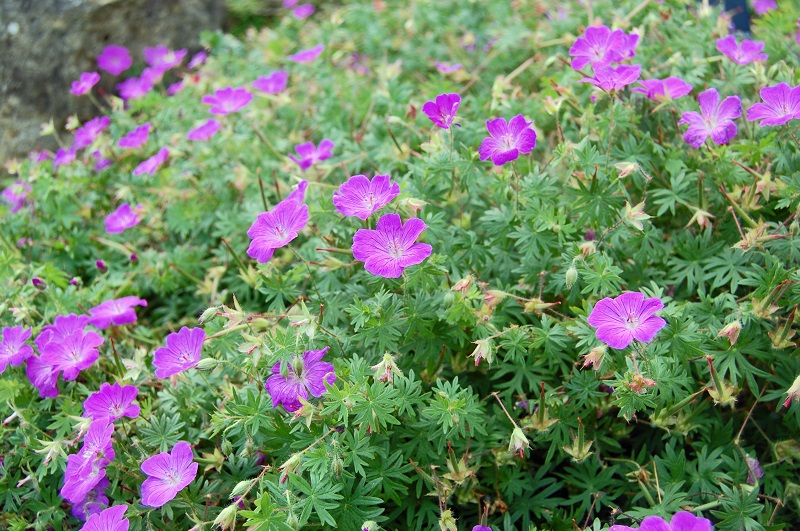 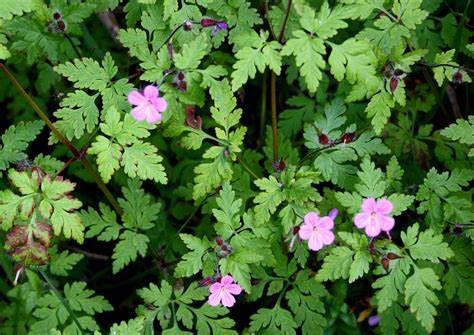 Another annual, the Dove’s-foot Cranesbill (G. molle), is named for the leaf’s resemblance to the feathered feet of doves. The little Cut Leaved Cranesbill, G. dissectum, is a long-established weed of disturbed ground. Several garden escapes have become established in the wild. At least 14 have been recorded in the Lothians alone.

Species from Europe and further afield offer further variety and there is now a wide range of hybrids, all of which are good garden plants.  The early flowering G. macrorrhizum comes in the pale pink ‘Ingwersen’s Variety’ or the darker ‘Bevan’s Variety’. G. x oxonianum ‘Wargrave Pink’ is one of the geraniums most often seen. 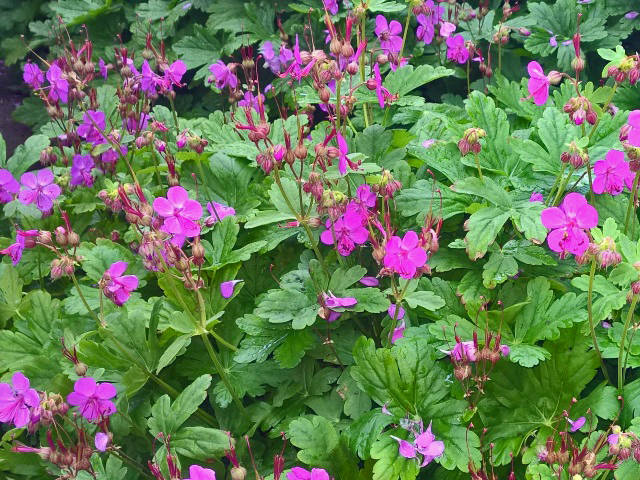 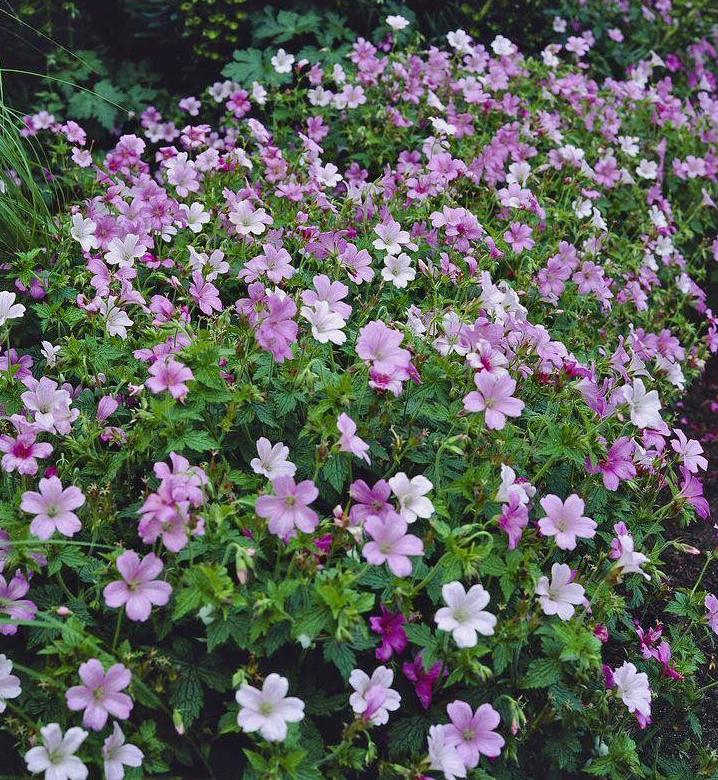 A deeper magenta comes with the vigorous Geranium ‘Anne Folkard’, which likes to scramble into other plants. There are lots of blue cultivars such as the old classic ‘Johnson’s Blue’, and the newer, and very good, ‘Rozanne’ (Jolly Bee is the same thing). This one is sterile, so the blue flowers keep going from midsummer well into autumn. 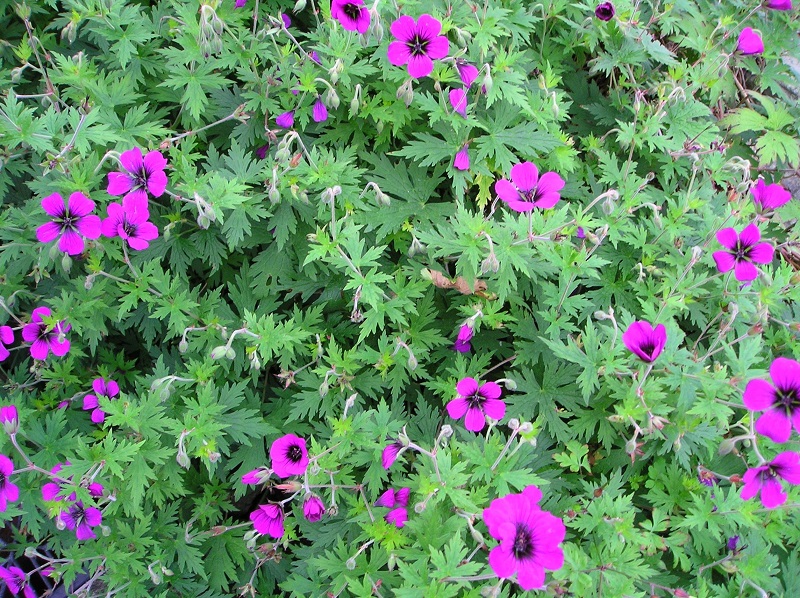 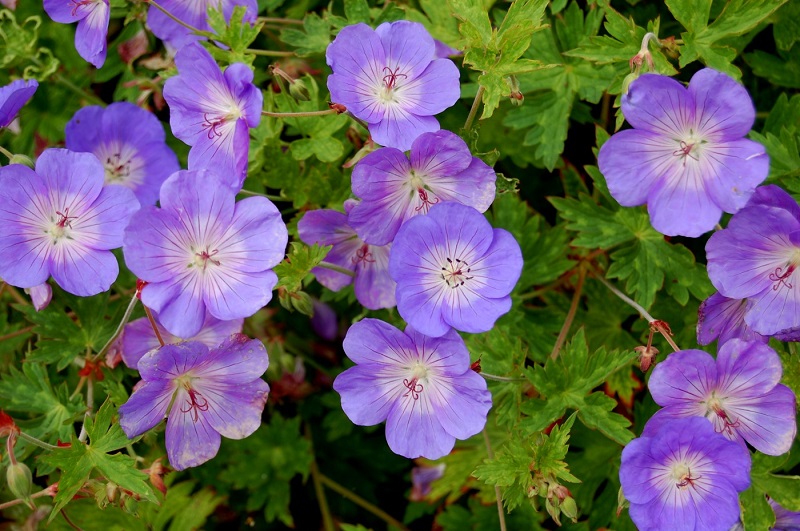 G. wallichianum ‘Buxton’s Blue’ has a white centre to the blue flowers.  ‘Mrs. Kendall Clark’ is a paler version of G. pratense while striatum is a pale form of G. sanguineum.  Good dwarf types include the pink ‘Mavis Simpson’ and the red ‘Russell Pritchard’. Even more compact are G. cinereum ‘Ballerina’ and Geranium cinereum ‘Laurence Flatman’. 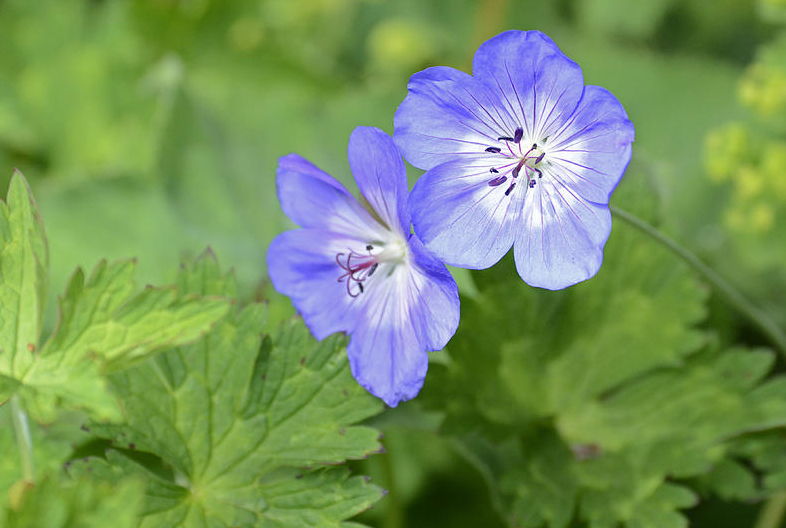 The more vigorous geraniums respond well to being cut back hard after their flowers go over and this will often lead to a second flush later in the year. They are also easy to increase by division. 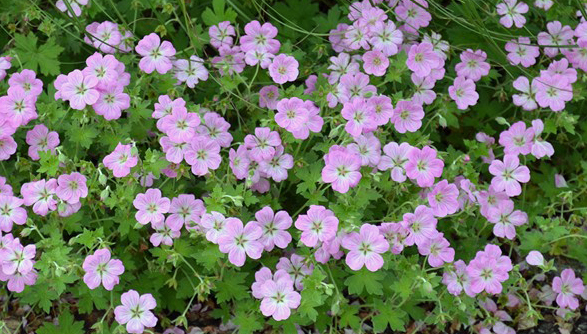 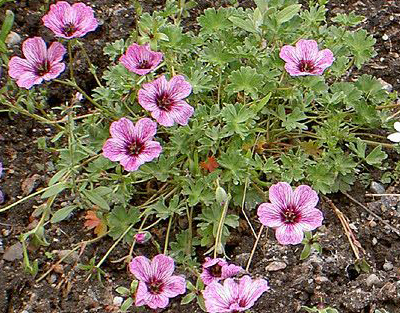 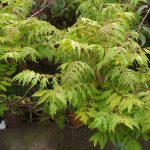