Now the festive season is over thousands of Christmas tree are being recycled, many by local authorities who would otherwise have to deal with them as rubbish. Prince Albert is said to be responsible for introducing the custom of decorating Christmas trees to Britain from his native Germany in 1841. Most Christmas trees in the UK are the Norway spruce, Picea abies. Although now widespread in the UK, having been planted for forestry since the 16th century, it became extinct as a British native during the Ice Age. It is a common tree not just in Scandinavia, but other mountainous areas of Europe. Its dark green needles are attractive, though prone to dropping in warm rooms, and the strong branches make it an ideal tree to decorate.

However, the commonest tree in Scotland is another spruce from much further away. The Sitka spruce, Picea sitchensis, is native to coastal areas of northwest America and was introduced to Britain in 1831. It flourishes on damper and elevated sites and it has a very fast growth rate compared to other trees.  This means it can yield high volumes of timber in a short time. The yield class figure is used by foresters to describe each year’s growth per hectare of a tree species. Sitka spruce has a yield class of 14 cubic metres; a native oak can be as low as 4. This means that Sitka spruce only needs to grow for 40-60 years to reach its maximum timber potential.

Sitka has a grey tinge to its needles readily identifying it from the greener Norway spruce. It is less suitable as a Christmas tree as its needles are much pricklier. In forestry planation spruce trees grow close together, forming a dense canopy, so few plants can grow beneath them. The dense foliage does provide cover for mammals, and birds of prey may nest in the branches. Smaller birds such as the crossbill, chaffinch, goldcrest, coal tit and siskin also use spruce trees. Caterpillars of several moths which feed on the foliage include the spruce carpet, cloaked pug, dwarf pug and barred red. Seeds from the large drooping cones are eaten by birds and squirrels. 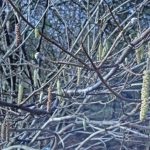