So many different daffodils

Daffodils, often in large plantings, are now brightening many parks and gardens. The more vigorous types such as the trumpets or large cupped are the most often seen.   Yellow is the predominant colour though some others, such as the large cupped, cream/white ‘Ice Follies’ (Division 2) also do well planted in quantity in public places. 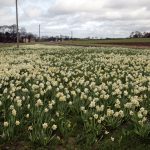 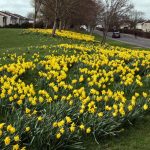 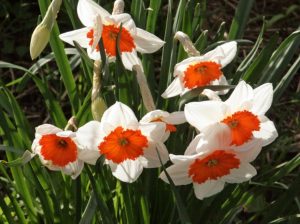 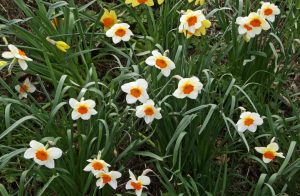 Daffodil enthusiasts use 13 divisions: 12 for the different cultivated forms and one for wild species and natural hybrids as wild daffodils are rather promiscuous! Two forms of wild daffodil grow in Britain, the two toned mainly in England, where it was the subject of Wordsworth’s famous poem, 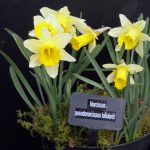 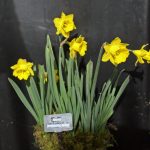 and the all yellow Tenby daffodil in Wales. They are available from bulb merchants but they can be slow to establish in gardens. Both are forms of Narcissus pseudonarcissus which is also the parent of the large trumpet types such as ‘King Alfred’, ‘Dutch Master’ etc (Division 1). Not all the 13 types of daffodil flower at the same time.

The hybrids from N.  cyclamineus (Division 6 ) are quite early. 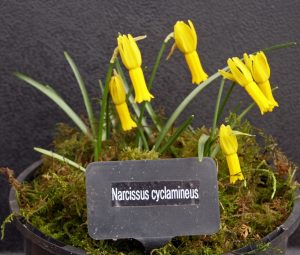 They show the ‘swept back’ look of the very small wild parent. This is a bulb that must not dry out, but can naturalise well in short grass. Its hybrids, like the all yellow ‘Rapture’, ‘Warbler’ and the bicolour ‘Jack Snipe’, are larger, but still relatively small.  The even smaller division 6 daffodils include ‘Mite’ and ‘Mitzy’ – these are classed as miniatures. 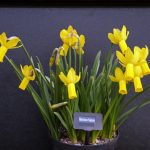 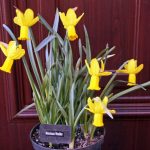 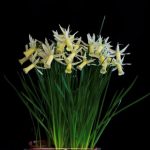 The very popular ‘Jetfire’ is a division 6 and is an excellent bulb for children to pot up for shows as it’s easy and flowers at the right time.  Probably the most popular dwarf daffodil of all, ‘Tete a Tete’, is in Division 12 (miscellaneous) but is also listed as a miniature.  It looks so different compared to its cyclamineus ancestor. All these are good choices for the Caley show. 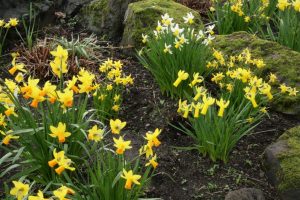 Other groups of small daffodils tend to flower a bit later. The triandrus group (Division 5) have more than one flower on each stem. Easily available examples include the white ‘Ice Wings and ‘Thalia’. 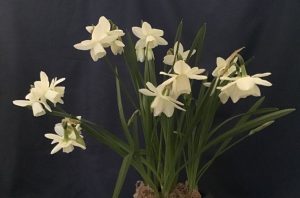 Also multi headed and often sweetly scented are the jonquils (Division 7). Again the hybrids, like ‘Sailboat’ and ‘Quail’, are often bigger and more vigorous than the wild species. 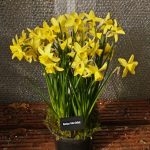 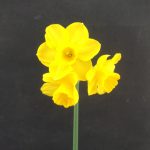 The daffodils derived from N. tazetta also have a scent but tend to be quite tall. Some are not fully hardy in Scotland. Paperwhites, for example, will flower by Christmas in pots, but most bulbs are imported from Israel and are not worth planting outside after flowering, which works well with most other daffodils that have been in pots. Tougher tazettas include the white ‘Avalanche’.

The latest group to flower, usually into May, are the mainly white poeticus daffodils (Division 9) derived from the old Pheasant’s Eye narcissus, the best known being the old cultivar ‘Actaea’. By contrast most of the bulbocodium group (Division 10) are small plants with very distinctive flowers without a perianth, thus the hoop petticoat name. Some, from southern Spain and Morocco, such as N. romieuxii are very early and best grown under cover. ‘Golden Bells’ is a later, strong grower which should do well in grass. 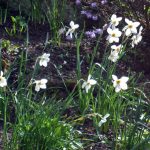 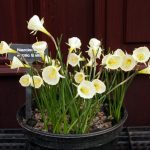 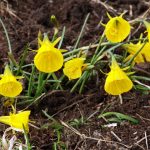 Double daffodils (Division 4) are not to everyone’s taste and of little use to pollinating insects. They do have exotic looking blooms which can fall over due to the weight of their petals. Even more of an acquired taste are the split corona types (Division 11). Some say they look as though they have been punched on the nose! 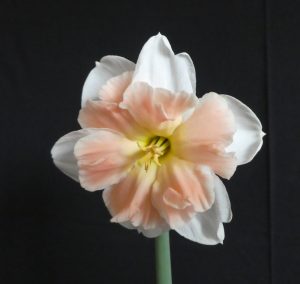 Most of the 13 categories include some very small daffodils which are also classed as miniatures’. The Caley Spring Bulb show includes classes for most divisions and miniatures.

Most daffodils are easy to grow. They are fairly resistant to mice, deer and rabbits. They like it fairly moist when in growth. After flowering allow the foliage to die back completely. If planted in grass allow to die back before mowing to ensure flowers next year. Never tie the foliage into bunches! Divide congested clumps to encourage more flowers.

You can find out more on the Caley website. 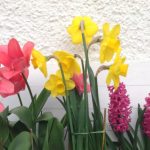 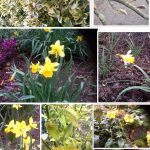