It is months now since the last blog from the allotment. In the meantime volunteers have managed to keep the Caley flag flying at Bridgend during these difficult times. Following the government guidelines carefully, the team have managed to keep going in a limited way at first but as lockdown eased, it has slowly became possible to spend more time there.

The team shared seeds and grew vegetables on at home to reduce the time spent on the allotment. Their no-dig approach has paid dividends since all they needed to do was keep the hoe going to stay on top of the weeds on the beds and the warm dry spring weather was a great help there. Potatoes and onions were already bought so these were first to go in in April along with the broad beans. Winter brassicas – kale, cabbages, broccoli and sprouts were sown at home and once the warmer weather arrived in May and June, and more time was allowed, the sowing – again mostly at home – and planting of summer veg was done.

In the past, sowing of summer veg like carrots and peas in April on the Caley’s cold and windy plot has been chancy. This year it has been interesting to see how much better the results are from leaving the first sowing until May, maybe something the team might carry on doing.

Now the plot is fully planted up and everything is growing well and looking great apart from the new strawberry plants put in at the start of the dry weather. Even with watering, they did struggle and one of the varieties – Fenella – still is pretty poor while Malling Centenary is now showing good growth.

It has been a good year for soft fruit with giant blackcurrants and luscious boysenberries. The apple crop is going to be excellent and there are even some plums to look forward to. The team have still managed their usual wonderful display of sweet peas.

So almost back to normal. We are sorry the Open Day and pruning workshop didn’t happen this year but if anyone would like to come and visit, please do get in touch. 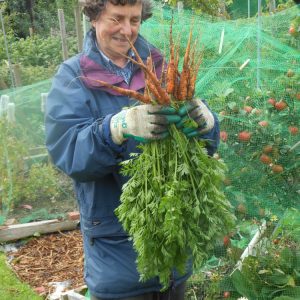 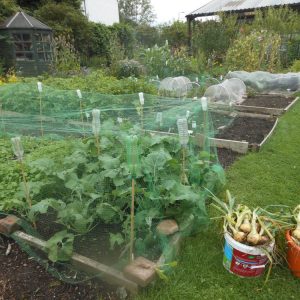 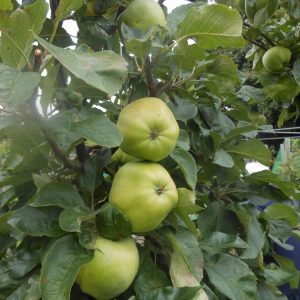 A cloudy and humid day but good temperatures for working.

Each year we try something new and this year it is oca and asparagus kale. The oca is also known as New Zealand yam though it originates in the Andes where it is second only to potatoes. The tubers can be eaten raw or cooked like potatoes and it is a winter crop like Jerusalem artichokes. It is doing well and with a home in the Andes, should give a good crop here. The asparagus kale has been grown from donated seed collected by a seed scientist from various crofts in Orkney and not available commercially and it is also doing well.

Pickings this week included the first of the runner beans and we also had chard, beetroot, carrots, blueberries, brambles, potatoes and onions of course. Next week we should have the first of the French beans ready.

Jobs for next week
Prune the currants
Tie in new growth on soft fruit
Keep the hoe going
Check for blight
Dig up next row of potatoes
Keep weeding!

A step back in timeAllotment, Blog

Harvesting at the AllotmentAllotment, Blog