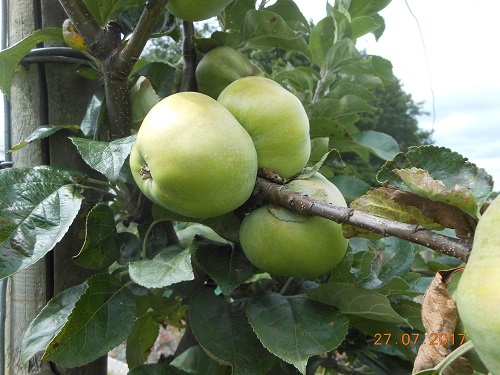 It was like an April day today, though the downpours fortunately held off until we were leaving.

We have been watering since early on this year, but it seems the plants prefer the rain and are showing impressive growth over the past couple of weeks. The few hot days we have had helped too of course.

The new shoots on the soft fruit finally were tied in today. The new plants have all settled in very well with good growth and fruiting.

The second early potatoes Maris Peer are beginning to die back so the shaws were cut back to a couple of inches and the potatoes will be left in the ground for two weeks to allow the skins to harden. We are also on the lookout for blight from now on. 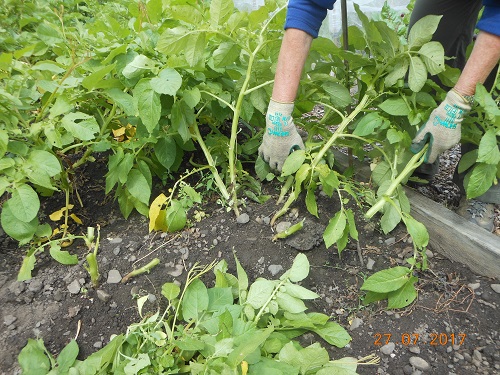 Some of the apples were needing thinned. Better to have fewer larger apples than a lot of small ones and most of our apples are on a dwarfing rootstock so we don’t want to overstretch the energy of the plant. The crop overall is smaller than last year, probably due to the weather being too cold for the pollinators to get to work at blossom time.

The succession sowing of carrots has not done well so had a final try today hoping to get some main crop ones for autumn pulling.

We started again on replacing the edging on the raised beds where the wood has rotted. And the rest of the time was spent on weeding. 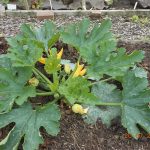 Unexpected crop at the AllotmentUncategorized