My May jottings described developing a garden in Orkney as being similar to learning to walk a tight rope. One moment the gardening balance is just right, no wind, wall to wall sunshine, tropical azure blue seas and daylight for twenty hours a day and then, BANG, a 90mph storm arrives.  Hundreds of hours of gardening are destroyed in a matter of hours.

Back in June Storm Hector certainly delivered that shock and I definitely felt that I had fallen off the horticultural tight rope landing unceremoniously on my well-padded backside! It serves me right for feeling a bit smug about how wonderful the garden was looking and with the warnings of an impending storm, I dared to feel prepared.

Kevin and I set about constructing new 80-foot-long wind breaks to protect the south long border with westerly’s forecast. Plants were tied in and stakes inserted, and a variety of large plastic plant pots covered precious gems from the expected blast.

I even had time to head off for lunch as Hector gathered momentum.

On my return (rather too cheerily I felt) Kevin greeted me with the news that the wind had changed direction and that the garden had been decimated. Our wind break had only served to exaggerate the effect of the storm, trapping the winds full force against the wall, leaving plants flattened and broken.

It was especially hard as the previous 3 weeks had been so perfect and I was deluded into believing that anything could grow on our beautiful island. With 18 Australian garden enthusiasts expected in 48 hours there was no time to waste…15 barrowfuls of dead and damaged plants and one septic horsefly bite and a trip to A &E later, the garden was restored to tidiness. I could be found in an exhausted heap on the sofa muttering that this time I was giving up…

My despondency lasted as long as it took for the antibiotics to take hold and by the time the Australians descended on The Quoy things were looking up. Yes, areas were beyond hope and replanting will be required – but miraculously Alliums survived, proudly towering over tough Hosta and Heuchera. Our visitors loved it and the damage only demonstrated how difficult it can be to maintain a garden here.

Three weeks later, with the arrival of July, the garden has almost recovered.  Nothing will restore the wind burnt Rowan and snapped Inula but the roses protected by their net cages are putting on a show and Nepeta and Centaurea (chopped back) are now beginning to form promising soft mounds once again. It’s all about resilience for both the gardener and the gardens! 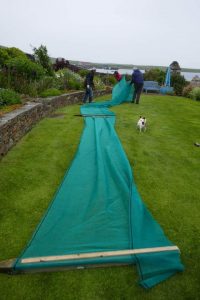 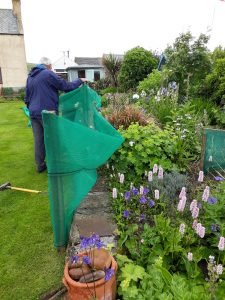 Setting up the windbreak 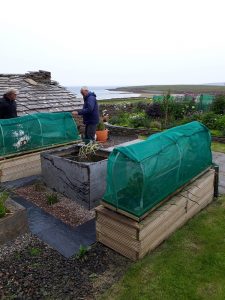 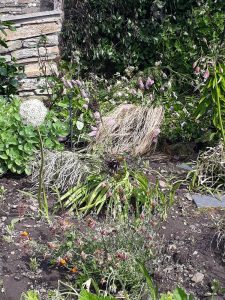 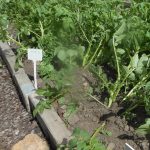 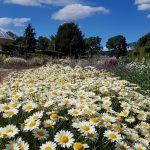