February 7th on the allotment

Thursday was a dry, still day today – much, much better than the drenching rain of last week.

Grass paths look good but the time involved in cutting the grass and more especially, keeping the edges neat is time taken away from growing crops, so the team is slowly converting the side paths into ones covered with wood chips. On Thursday they finished taking off the grass on the second side path so the two paths now need to be well forked to take out all the perennial weeds before weed suppressing matting is put down with wood chips over it. After this they will need minimal maintenance.

The tools need to be cleaned and sharpened for the new season so that was started. The Brussel sprouts are now over so they were taken out and the bed tidied up. The Welsh onions have started growing again, another useful crop as you can use the early shoots as spring onions

But veg is still being picked and the team had the last of the cabbages,  some leeks and a few sprouts. For the first time, there was a poor crop of Jerusalem artichokes. All the

plants were dug up but the tubers were few and had not thickened up much. Normally it is such a reliable cropper (as you can see from the picture) and this makes it a useful crop at this time of year. Another result of the poor growing season last year.

Jobs for next week :Continue with the side paths; Tool sharpening. 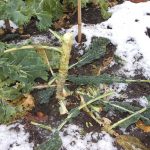 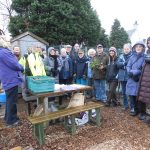 Valentines day report from the allotment.Allotment