Congratulations to Jim McColl MBE, former Caley Honorary President and an SHM holder. He has been recognised by the Royal Horticultural Society and awarded the Victoria Medal of Honour. Established in 1897, with the assent of Her Majesty Queen Victoria, the Victoria Medal of Honour (VMH) may be awarded to British horticulturists deserving of special honour by the Society. Only 63 medals may be held at any one time, in recognition of the duration in years of Queen Victoria’s reign.

A full list of the awards can be found here. 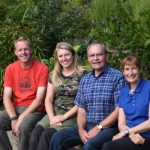