A pleasantly warm day with sunshine to speed up the ripening of the Victoria plums. They are looking ready to pick but are still sticking resolutely to the branches! Last week all the old fruiting branches were removed from the soft fruit and today the new shoots were tied in to the wires. These will bear the fruit next year. 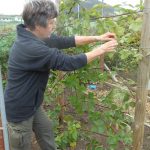 Tying in the new shoots on the blackberry.

The netting on the winter brassicas had to be raised. The sprouts and broccoli are growing strongly, as are the red cabbage, due to the extra potash from the several bonfires which were held on this bed earlier in the year. And while we were at it, good stout stakes were put in to support the tall brassicas during the coming winter gales.

The grass was cut and weeding round the edges continued.

The Caley was at the Dundee Flower Show this past weekend and a selection of fruit and veg were picked to put on the stand. 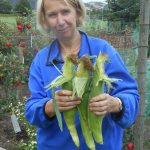 First picking of the sweetcorn

The sweetcorn is ripening now, and we had the first picking today. The little yellow squashes won’t grow any larger, so time to take them off the plants and dry them off. The marrows are still growing for the Dalkeith Show next weekend. 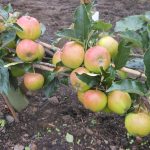 Changing seasons on the AllotmentAllotment, Blog 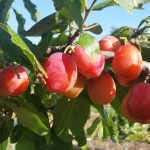