Mad Dogs and Allotment Folks go out in the Midday Sun!!

Still scorching weather but the fruit and veg are all doing amazingly well with only a weekly watering. We spent most of today harvesting, watering and doing some weeding. The beds are pretty clear, but the weeds on the paths are catching up with us.

We had an excellent picking of the bramble – Loch Ness – the best there has ever been for this fruit, also still picking the raspberries, the last of the gooseberries, Tayberries and loganberries. The fruits on the autumn raspberries are looking well and will probably be ready much earlier than usual.

We picked another marrow today for the autumn shows and there are more coming, along with the courgettes. The shaws of the early maincrop potatoes are dying down so they were cut off and we shall leave the tubers in the ground for a couple of weeks to allow the skins to harden. The dwarf French beans had their first picking. We pulled up one carrot out of the few that grew to see how they were – not a great result as you can see from the photograph! 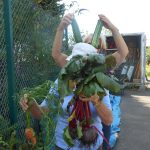 The Allotment Team are very shy.

The cabbage root fly attacked some of the winter brassicas, but we had some replacements, so they were planted out with collars round the stem to stymie the fly – hopefully!

We decided to grow the Minipop variety of sweetcorn this year as well as our usual one of Swift. Swift has already started to flower but the Minipop is still growing apace with no sign of flowering. Its ultimate height is 150-200 cm. 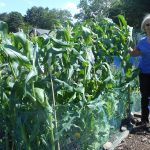 Minipop Sweetcorn racing for the skies. 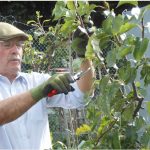 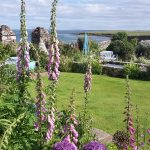