More repairs on the Allotment

After the storm of last Wednesday, we had yet another day of repairing the damage on the allotment.

One of the posts holding the willow windbreak had snapped so it had a ‘splint’ put on it.

Most of the sweetcorn had snapped off, the runner beans had bad wind damage and were teetering and the sweet peas were in a bad way, so time to call it a day on them all and they were taken out.

We also lost one of the ‘Pentland Brig’ kale plants. It had been staked but it was a very leafy plant.  The stake had snapped and unfortunately the kale did the same at its base.

We picked up a number of apples from the ground, even quite a few from the latest of the apple varieties which are nowhere near ready for picking.

On the positive side, we managed to prune the remaining soft fruit so that is off the to do list at last, but the new growth still needs tied in.

And time for the last planting of the season, some pak choi were put in to give greens in early spring.

No photographs this week as we were too busy tidying. 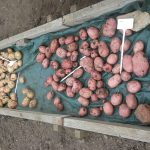