Brian became Head of Landscape with Glasgow City Parks Department in 1980. He subsequently led on Environment Management, being responsible for landscape projects in the Glasgow City Council Parks and Recreation Department. Following his retirement, Brian joined the committee of The Friends of Glasgow Botanic Gardens in 2003 and has worked tirelessly for them since that time. Brian became Chair of the Friends in May 2009 and has played a key role in raising funds for numerous projects both large and small.

Brian was also involved with The Incorporation of Gardeners of Glasgow, one of the Incorporated Trades in Glasgow Trades House. It has its origin in an early 17th Century Trade Guild regulating the trade in garden produce, although it is now largely a charitable body giving grants to members who have fallen on hard times. Brian served on the Master Court for a number of years where his links with the horticultural and gardening worlds were appreciated and useful.

In recent years, Brian has been involved with the setting up of the Friends of Glasgow Parks group, drawing on his experience with other organisations. He has also been a supporter and contributor to the establishment of a Friends of Botanic Gardens Forum – which now has a membership of 21 groups from Botanic Gardens/Arboreta through the UK and Northern Ireland.

Throughout his career, Brian was in leadership positions. He took these skills into retirement and applied them to the roles he took up with a number of charitable organisations.

In addition to leading the Friends’ committee Brian has taken the time to organise Friends outings and the Friends’ programme of lectures and talks. He has liaised and worked closely with senior management within Glasgow Council who are responsible for the Botanic Gardens. 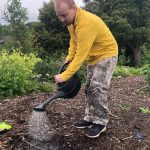 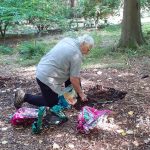