Tales from the Garden – July Drought in Edinburgh

Read on for the latest update from Anna about her beautiful garden, Redcroft.

Two days ago the temperature was 41 degrees in the greenhouse and when I hosed it down the temperature only went down to 36.  We have had a few unusually hot days but before that we seem to have had many days of drying winds and very little rain, so the garden here, like everywhere else, is extremely dry.   It is a relief to get most of the long grass cut as the garden looks less shaggy and the process of getting the spring flowering shrubs pruned is quite well advanced. 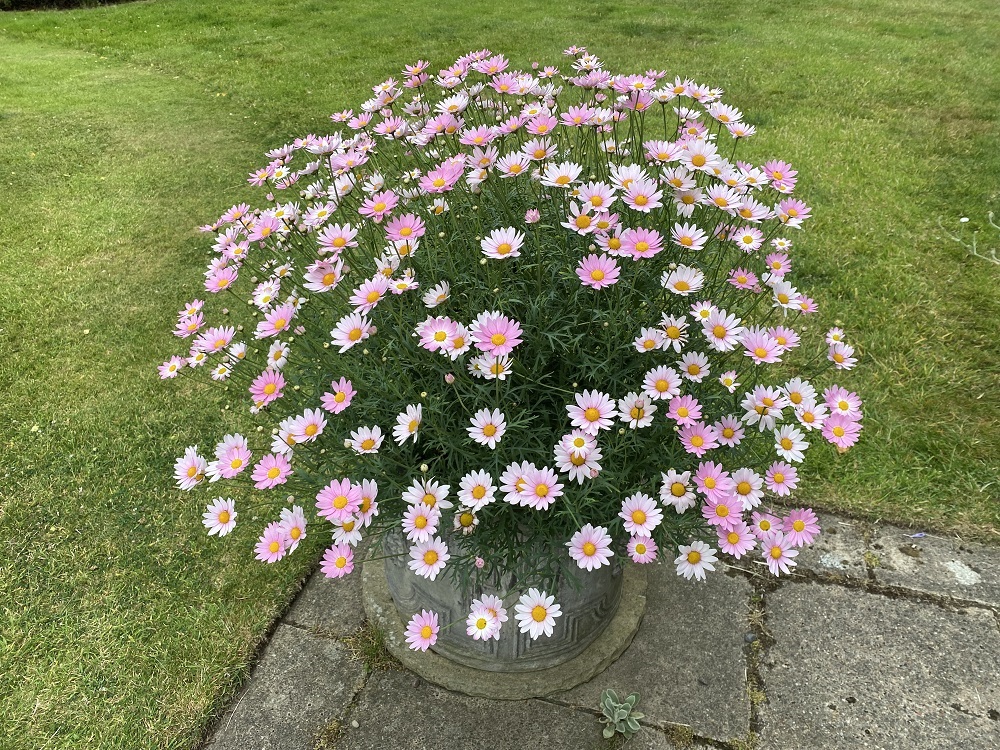 For many years now we have had a pair of pots of these Argyranthemums on our patio. They need a lot of care and attention and react badly to being dry.  But they are very reliable and consistent, and once in flower continue to flower until the autumn. Caroline Pearson, an expert propagator (and a Caley member) grows them, and five small cuttings in each pot are enough to provide a good show all summer.  I used to include petunias, verbena or lobelia in these pots but I now resist experiments and prefer the simplicity of the daisies on their own. 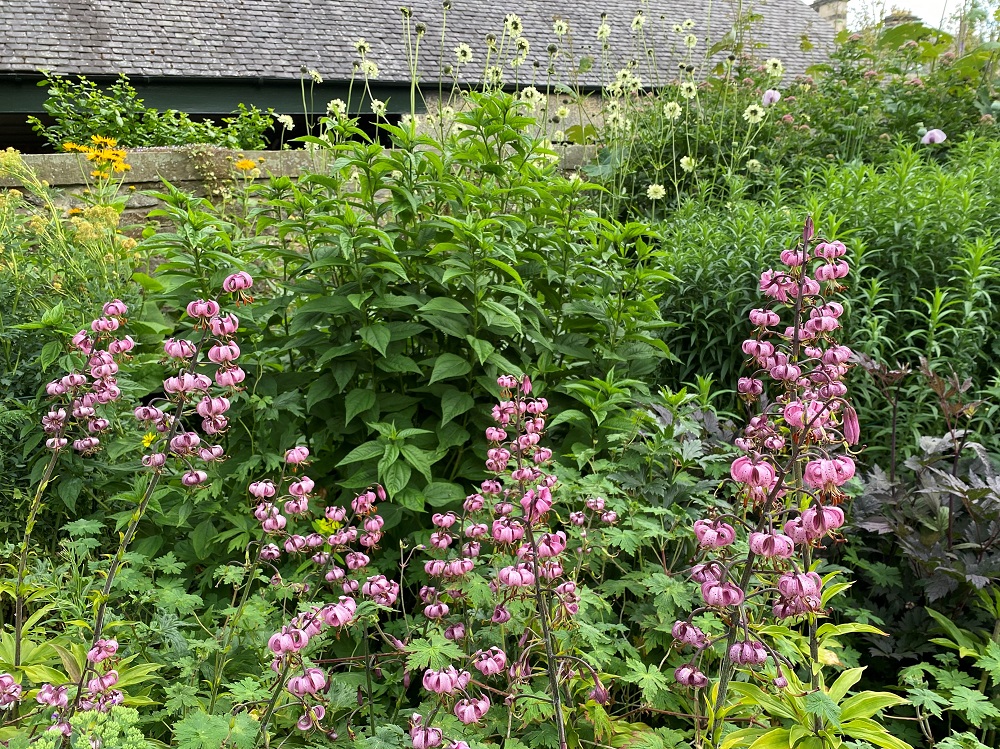 The herbaceous border is gradually coming into its own.  I like it when it is not too far advanced and many of its plants are still confined to their clumps and are ready to flower in the near future.  It is quite heavily staked and anything we trust to luck gets damaged by the wind.  In the foreground are the Martagon lilies which flower well although their leaves and stems decay before the flowers, behind them the pale yellow flowers of Cephalaria gigantea, a tall scabious, which is always a bit disappointing as the flowers are very pretty, but never seem to be out in any quantity. Both these have been part of the planting here since we have been here. The darker yellow is Inula magnifica, given to me recently by a friend and flowering here for the first time – a good addition to the back of the border. 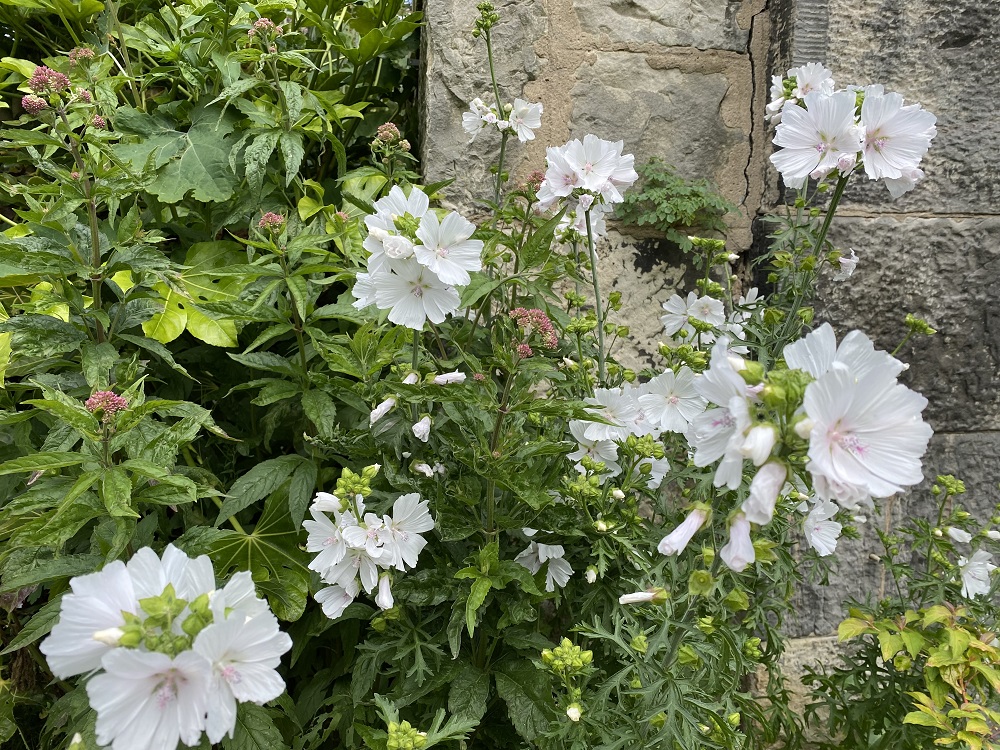 This pretty mallow, Malva moschata, which also comes in pink, is self-seeded and has found a good spot for itself at the end of the herbaceous border where it is accompanied by a Eupatorium, also self-seeded. Neither of these shows any signs of suffering from the drought. 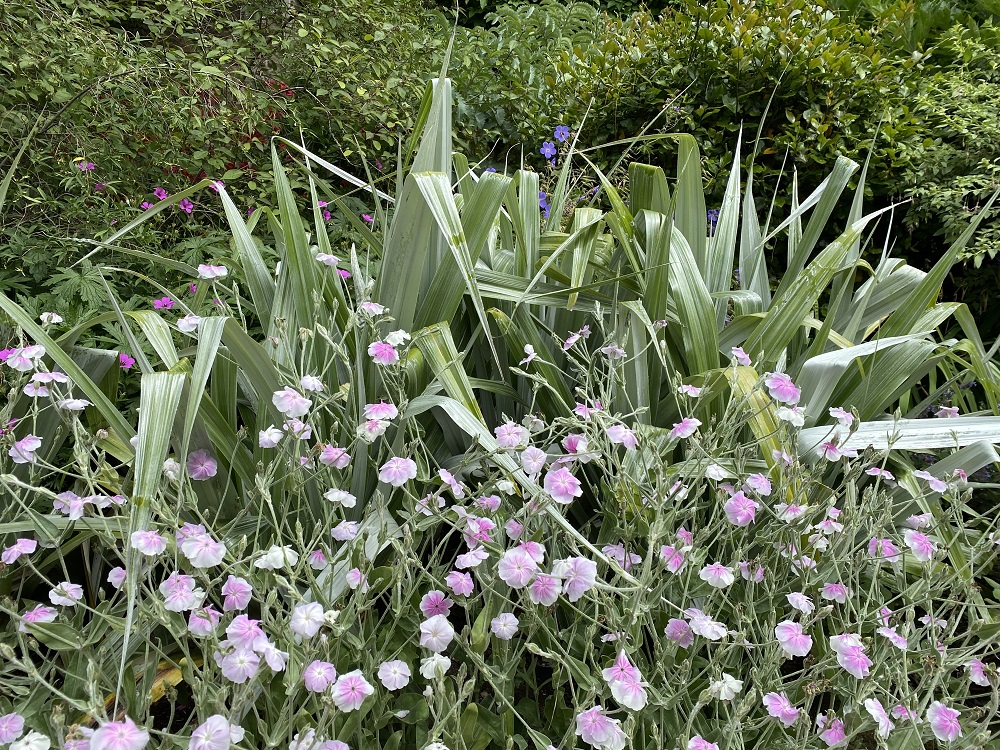 Lychnis is also an enthusiastic self-seeder around the garden, especially in the gravel. This pink and white version is dominant this year and I like the way it has arranged itself in front of the Astelia, one of the stars of the place which looks good most of the year. 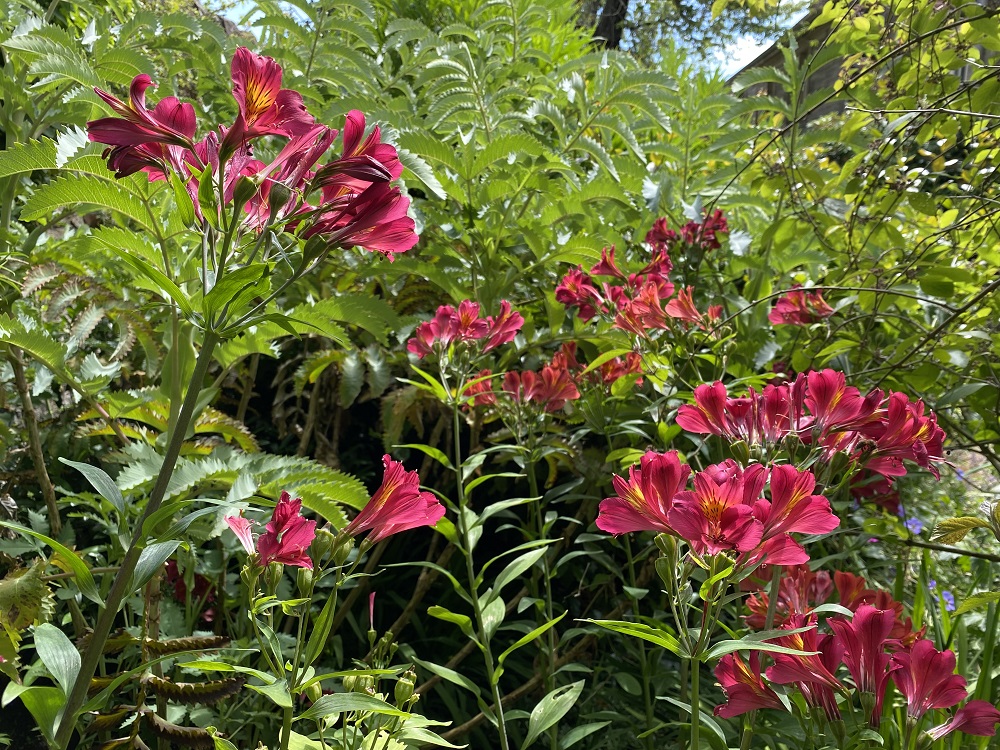 Just behind the Astelia this Alstroemeria has a time-honoured place from which it spreads out. Most often you glimpse the deep red, an unusual colour here, through leafy branches. It is seen here in front of the blue green of Melianthus major which was not cut back from the frost this year and seems to be getting ever bigger. 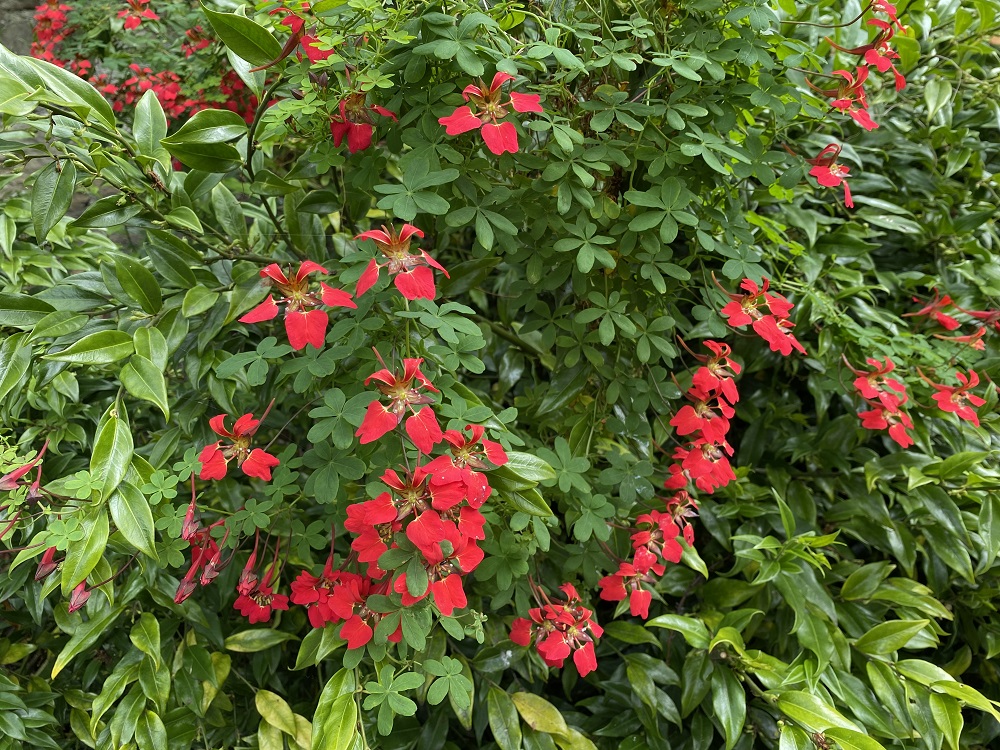 A much brighter red is Tropaeolium speciosum which used to be all over this area between the house and the road but recently was hardly to be seen. Now it has come back and makes its mark as a striking contrast to the very green shrubs of the area. 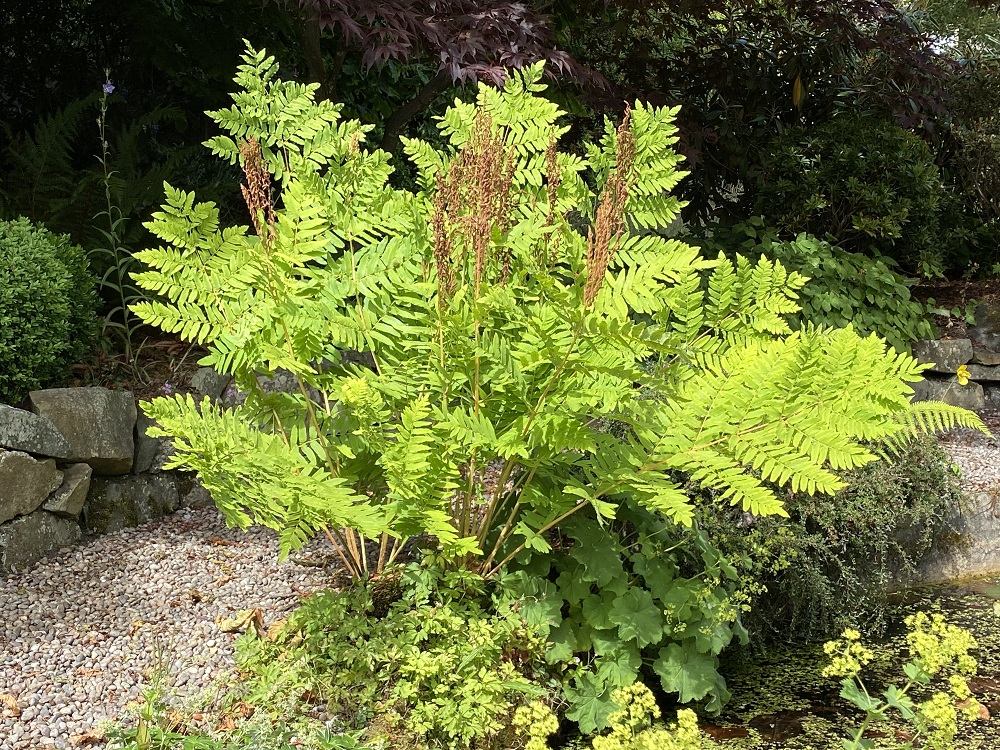 On the rockery on the edge of the pond Royal Fern (Osmunda regalis) flourishes and retains this vivid green right through the summer. It arranges its fronds in a way that would almost merit praise for a flower arranger, and it makes a good colour match with the Alchemilla in front of it. 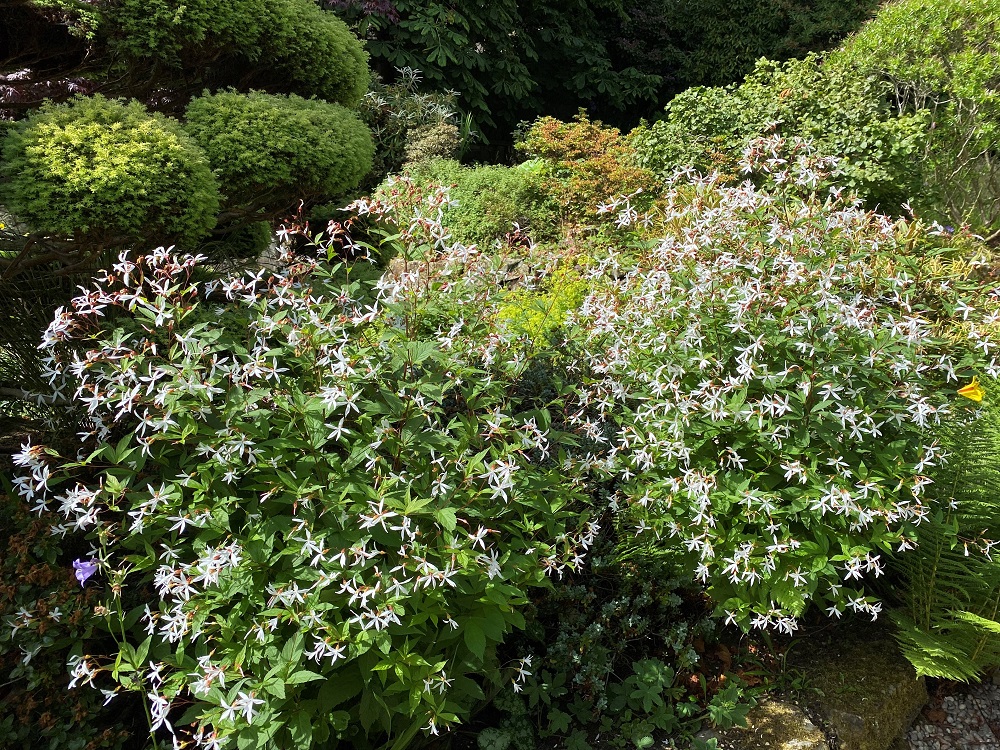 Also growing in the rockery in a rather unsuitable confined space where it is very dry is this perennial, Gillenia trifoliata.  I would like to move it to the herbaceous border where I feel it would be amongst friends, but its stems are very spindly (although they don’t need staking here) and the flowers very small, so it is difficult to find it a suitable space there. 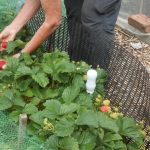 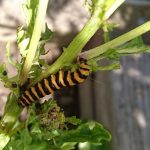 Hot work on the AllotmentAllotment, Blog