Things are hotting up on the Allotment

Thursday was the hottest day we have had so far this year, so a priority was getting the hose out and giving all the veg a solid watering at the roots. A sprinkle from a rose only wets the surface and encourages surface rooting – not a good thing in dry weather.

The autumn-sown onions were lifted and tied onto the fruit cage frame to dry off. These are for using now, unlike the spring sown onions which will last througout the winter. The leeks – variety Musselburgh – were planted out along with the Hamburg parsley. Carrot seed was sown in tubs using sieved soil. These were put into the shed to keep the germinating shoots away from slugs and snails and hopefully, this way, we shall have a harvest. All of our previous attempts this year have all disappeared into beasties tums.

We had pickings of strawberries (which are still doing well), beautiful sweet peas, the last of the spring cabbage and the first of the fennel and courgettes. The saskatoon berries are ripening and we found that the ripe ones were sweet unlike in previous years – possibly they need really hot days to ripen properly. The early potatoes are at last ready and a grubbing at the roots brought out a few for a taste. Next week the shaws will be dug up.

It was suggested that using water which had had garlic soaking in it would help to deter slugs and snails so always willing to try any deterrent, we tried it on the veg which were showing bad slug damage, especially the winter brassicas and the swedes – one to watch and see if it makes a difference. The smell is certainly pleasanter than comfrey liquid. 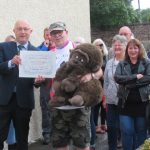