Signs of life on the Allotment 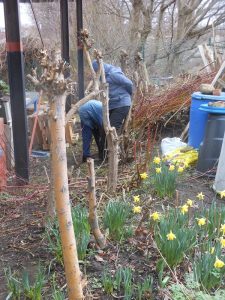 Good to see the early daffodils out on the plot, and the so-called ‘late’ rhubarb which is really almost all-year-round rhubarb already has leaves and short stalks.

We finished coppicing the hazels and worked on cutting back last year’s growth on the willow which shelters the plot from the west. The willow trunks look stark and bare now but will soon be putting out new shoots. We continued to work on the low woven hazel fence which will protect, hopefully, the sweet peas from the rabbits.

The first plantings of the new season are the onion sets but, unfortunately, the ground is still too cold at the moment. Next week we shall put a black plastic cover over the onion bed to warm up and help dry the soil. Then, in a couple of weeks, the sets can be planted out. The next plantings are the early potatoes which we put in around the middle of April and again the soil will be covered with plastic for a couple of weeks beforehand. In the meantime, the seed tubers are chitting in a light, cool place.

It is also time to sow the first of the broad beans. It is better to do them in pots at home and give them a good start. Direct sowing at this time of year generally is only feeding the mice. 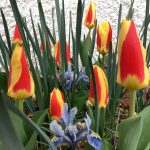 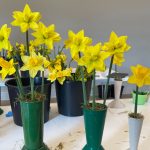