Tales from the Garden – Autumn at Redcroft

Caley member, Anna Buxton, has sent in her latest update from her beautiful Edinburgh garden, Redcroft.

Beautiful days like today when the whole garden is suffused with golden light and the red berries of the cotoneasters, the yellow berries of the Sorbus ‘Joseph Rock’ and the purple berries of the Callicarpa are all highlighted, inspire me to write this blog.

There is now a short lull before we have to cope with the massive volume of leaves from the horse chestnut and the birches.  We have more or less caught up with the pruning and last week the lawn and some of the long grass was cut, giving a well-tailored look to the garden.  The orange Begonia ‘Glowing Embers’ in the yard is miraculously still looking good, as are both the pink and yellow daisies. And the Nerines are still making a contribution as their bright splash of pink is not completely over yet. 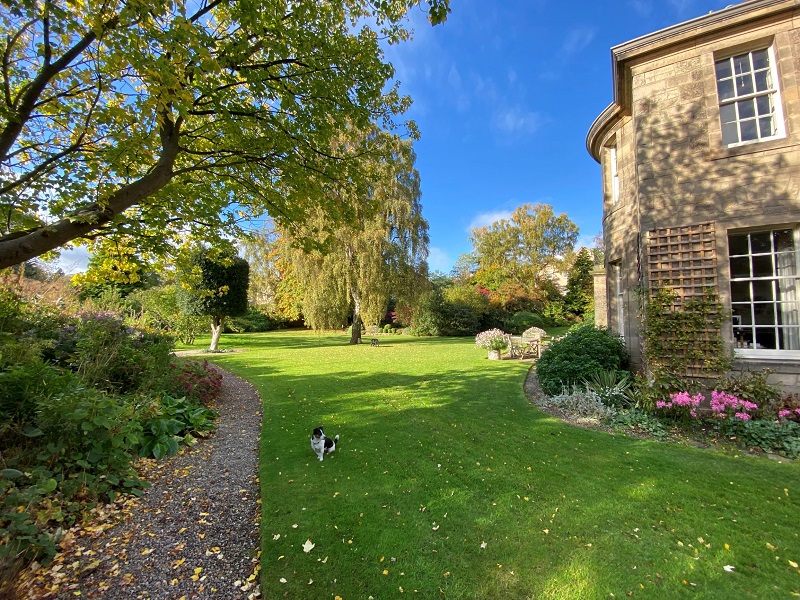 This is the view that greets you as you enter the garden. Maisie, now a year and a half, knows every nook and cranny of the place and treats it as her hunting ground.  She has caught squirrels, mice and baby birds, tormented many a frog and given good chase to the foxes. 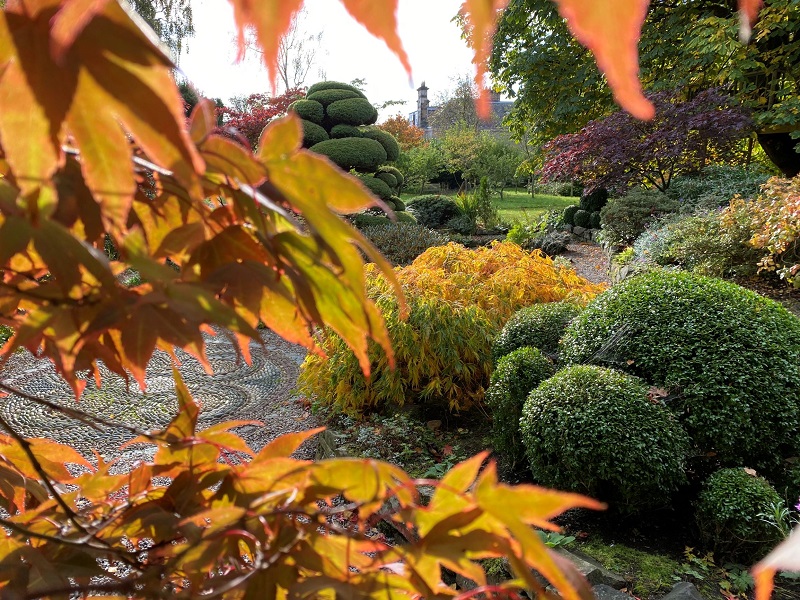 On the rockery brightly coloured acers contrast with the smoothness of the box balls and cloud pruned conifer. 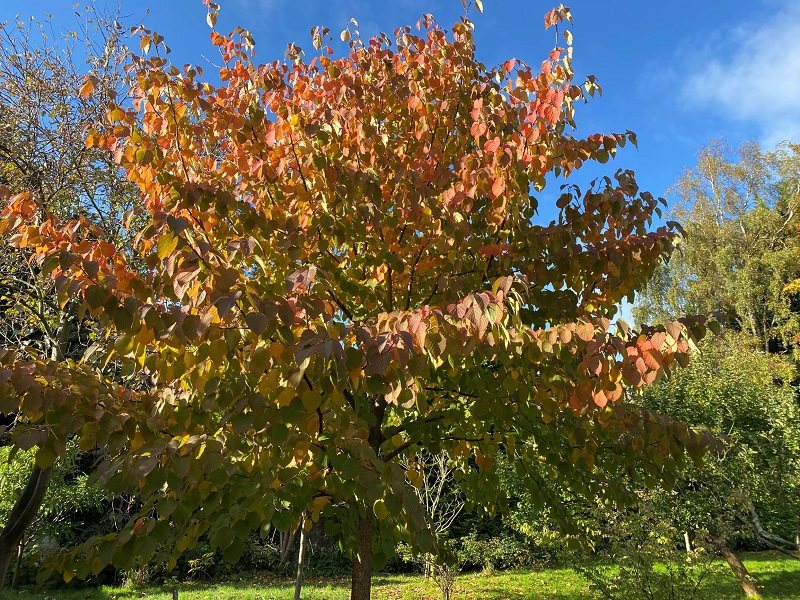 My favourite tree here at this time of year is this Davidia involucrata or pocket handkerchief tree.  Named after the French plant hunter, Pere Davide, and first introduced in 1869, it needs a fair amount of space and does better with some shelter from the wind.  It was planted here in 2008, so far we have only had one or two hankies (white hanging bracts) but the tree itself is a very satisfying  shape and it hangs on to its leaves as they gradually turn red and orange and are seen at their best with the sunlight shining through them. 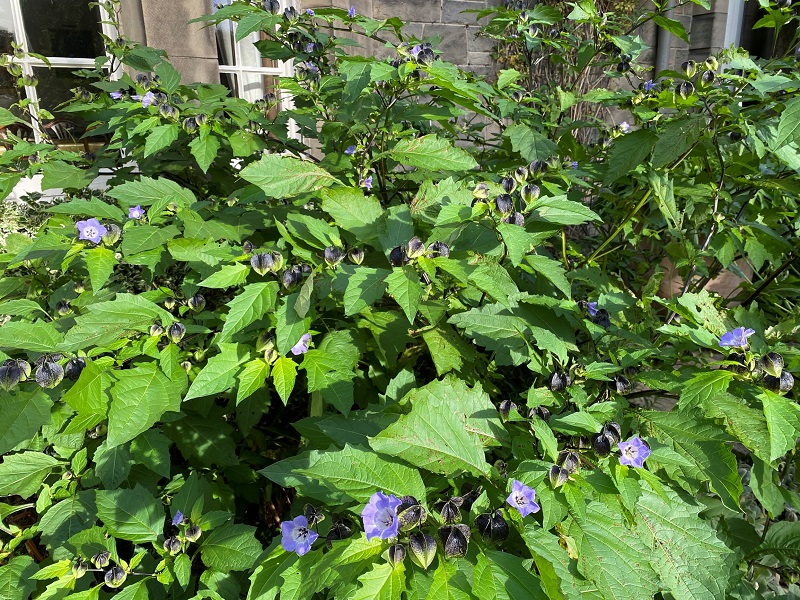 Nicandra physalodes (Solanaceae) is a little bit sinister. It is an annual, a native of Peru and self-seeds here in many places, especially in the compost heap, growing extraordinarily quickly from late Spring. Its blue flower open one by one and its strange, almost black, seed capsules resemble those lovely orange ones which you can often buy in florists (Physalis, hence the name). Here, it is poaching on space allocated to some new Penstemons which I hope will recover to fill the space next year. 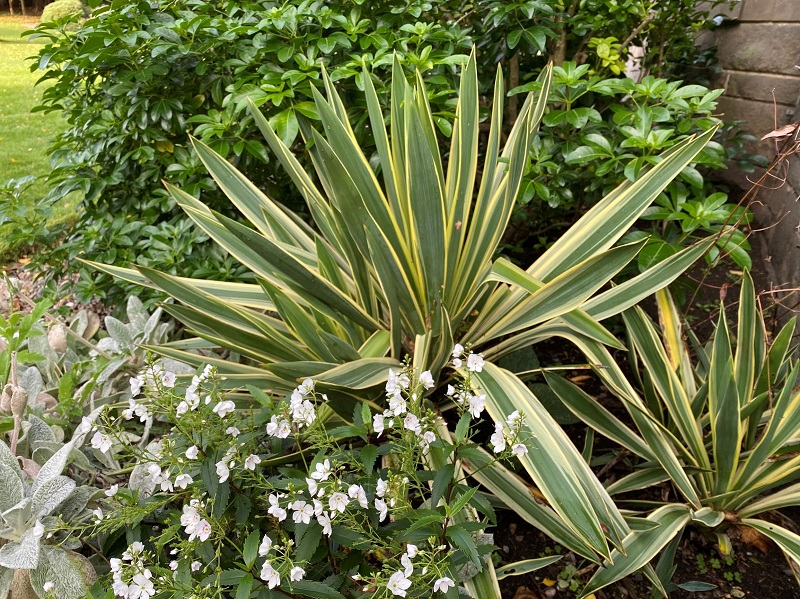 Parahebe lyallii is rather unobtrusive in flower but forms dense clumps which provide a very good edging to the front of a bed in a number of places here. This is an improved form, taller and with bigger flowers than the other ones and perhaps has a different use. It grew from a cutting from a friend’s plant.  Although it has not done very well until now, it is, surprisingly, putting on a good show in front of this Yucca gloriosa ‘Variegata’.  The Yucca has a good place here on the corner of the house but I am not fond of it. It often has brown spots, and at the end of the leaves there is a fearsomely sharp point which makes cleaning it up a threat to the eyes. 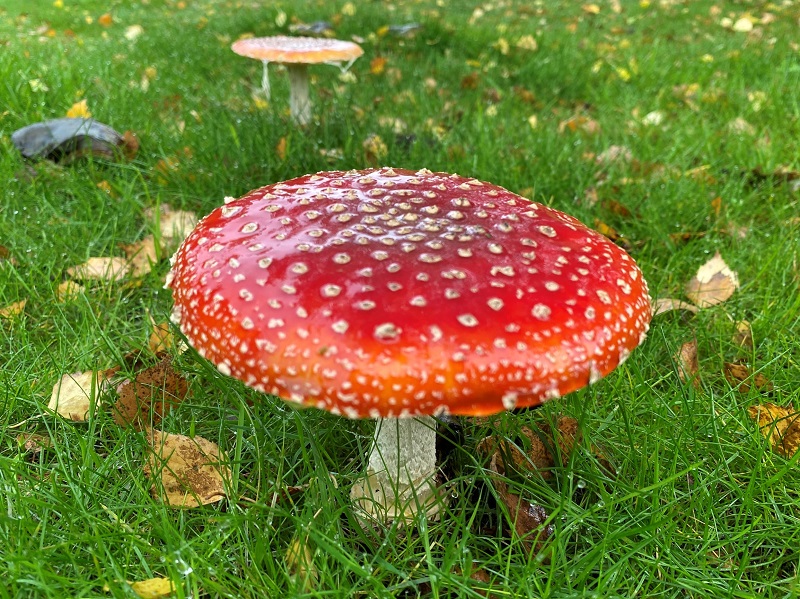 I can’t resist including this Fly Agaric as with a couple of companions at different stages of growth it provides such a colourful splash in the middle of the lawn underneath a birch tree.  Said to be hallucinogenic and according to my Collins Guide,” poisonous and dangerous but rarely fatal.” 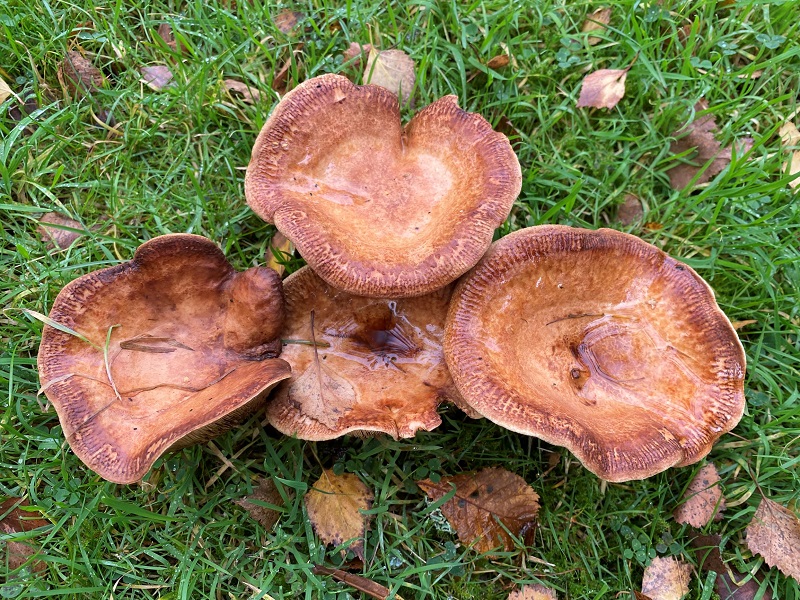 We have quite a few different fungi but even when I manage to identify them I promptly forget their names. I don’t know what these ones are (please let me know if you do). They are also growing in the short grass, and they make a nice group and I like the way they hold the recent rain and the pie crust pattern on their caps. 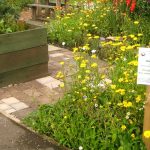 Autumn planting on the AllotmentAllotment, Blog 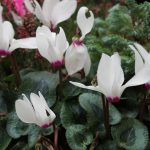