Tales from the Garden – Late Winter at Redcroft

Anna has sent us the latest update from her lovely garden in Edinburgh.

The garden is waking up and is full of promise but nothing packs more of a punch at this time of year than the crocuses and there are some wonderful displays around Edinburgh. They are seen here under the large horse chestnut, the host of our treehouse.  The crocuses are always spreading into new places and do better than the snowdrops, but they do need the sun to shine in order to perform like this when they attract plenty of early bees. 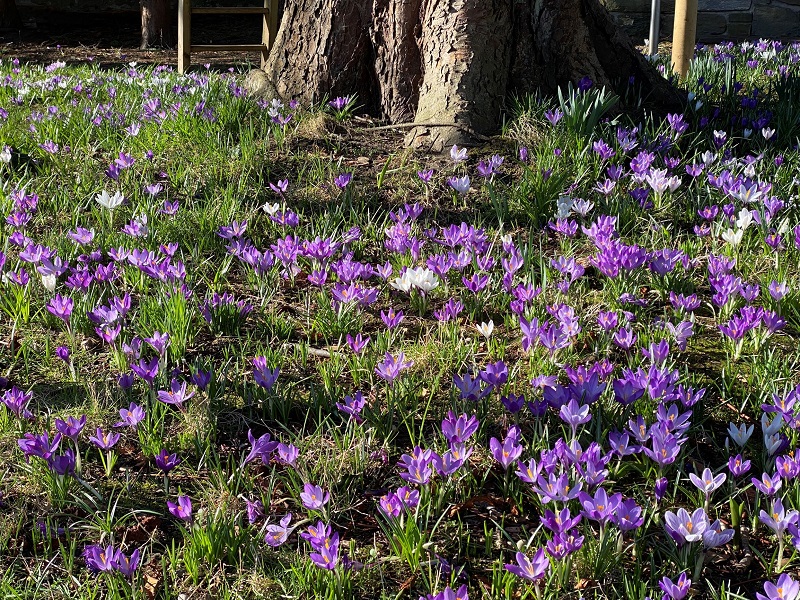 This miscellaneous collection of ill-matched pots decorates the porch steps at the moment. They are all old bulbs repotted and the labels often misrepresent the contents which makes for surprises such as the pale blue iris, which I think is Sheila Ann Germany.  The purple hyacinth is Woodstock which I have bought fresh for many years for the house but the old bulbs do well a second or third year and need less staking as the flowers are thinner and less inclined to flop.  The Narcissus is Tete-a-Tete, seen everywhere because it is so wonderfully consistent and early, and the generous clump of snowdrops was a lovely present from my sister-in-law. 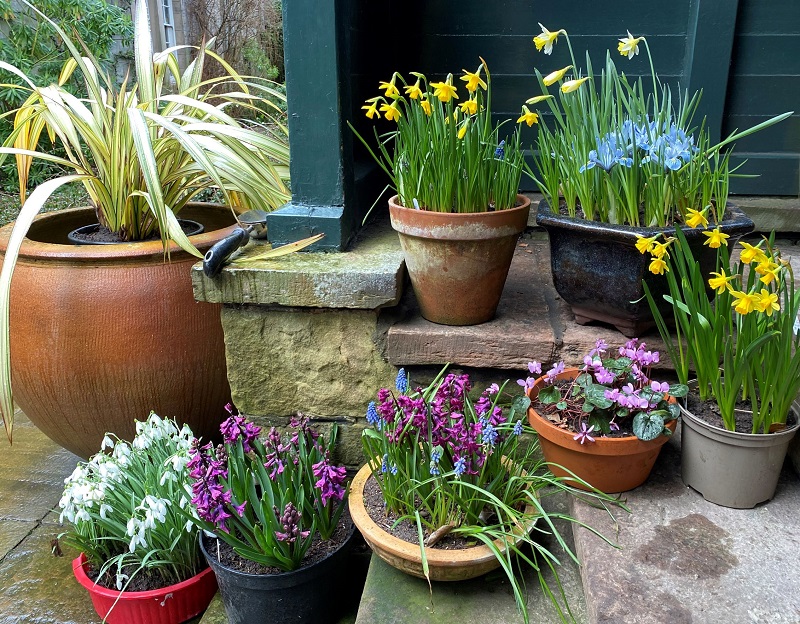 The white pulmonaria, P. ’Sissinghurst White’, grows well in this south facing bed and it was in almost full flower before the end of February. The idea is that groups like this punctuate the front of this border with white muscari between them. It doesn’t really work out like that though as the muscari are nowhere to be seen and the pulmonaria has to be controlled as it spreads outwards and is inclined to invade the space of the nerines, whose new growth can be seen here.  This ground is heavily used for after the pulmonaria, self- seeded Geranium palmatum take over and fill the spaces between some species peonies which have to be carefully staked and sometimes  need watering.  Nerines line the front and provide a splash of vivid colour in the autumn. 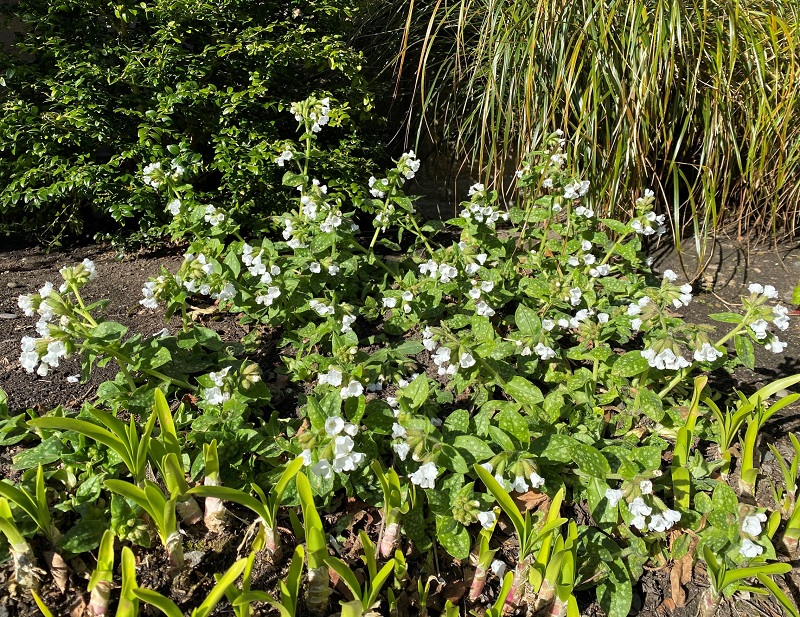 In the yard, covering part of one of the old grey walls, is this Chaenomeles ‘Crimson and Gold’. It has flowered unusually early and well this year, for it has never really looked happy before, perhaps because its roots are confined by paving, and has just redeemed itself enough to be saved from the spade. 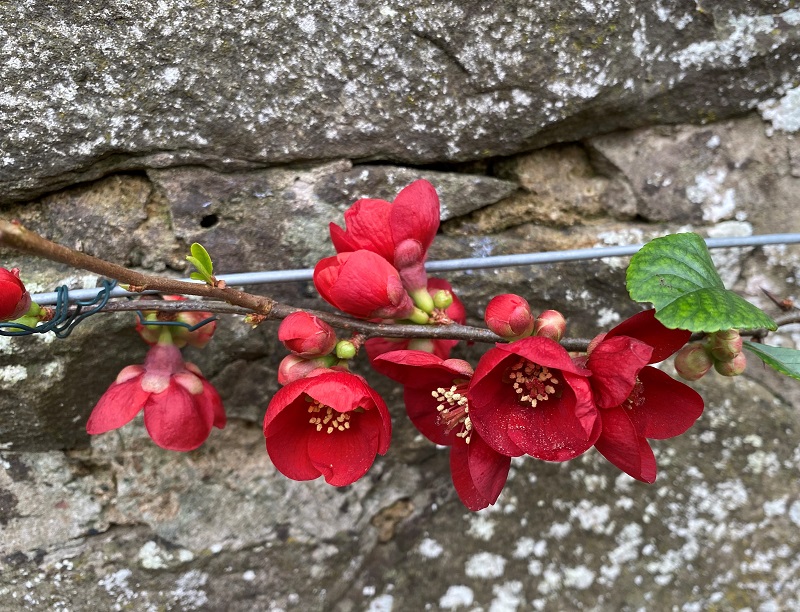 The hellebores have also done well this year.  This clump of H. foetidus has arranged itself gracefully and has been a winter feature. H argutifolius seeds readily and forms big clumps. But although I have tried hard with the orientalis hybrids, and this year they have at least evaded the attacks of the voles or mice which are inclined to sever almost all the flower stalks, we don’t seem to have the generous clumps which I see elsewhere. 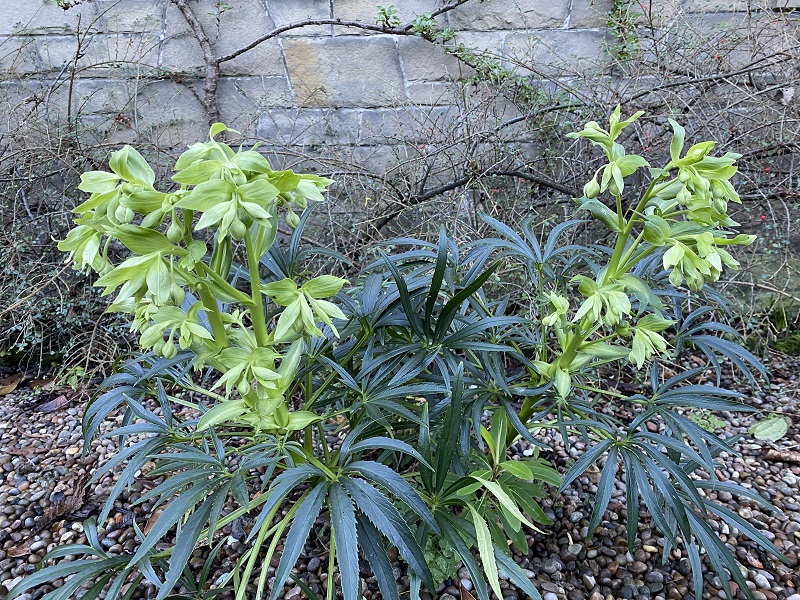 I am pleased with the way these Pittosporum ‘Tom Thumb’ have filled the narrow bed under the kitchen window where for many years we grew lavender and Tulip Ballerina. The Euphorbia is self- seeded so perhaps is not as vigorous as it might be, but it provides a nice bright contrast to the shiny dark pittosporums. 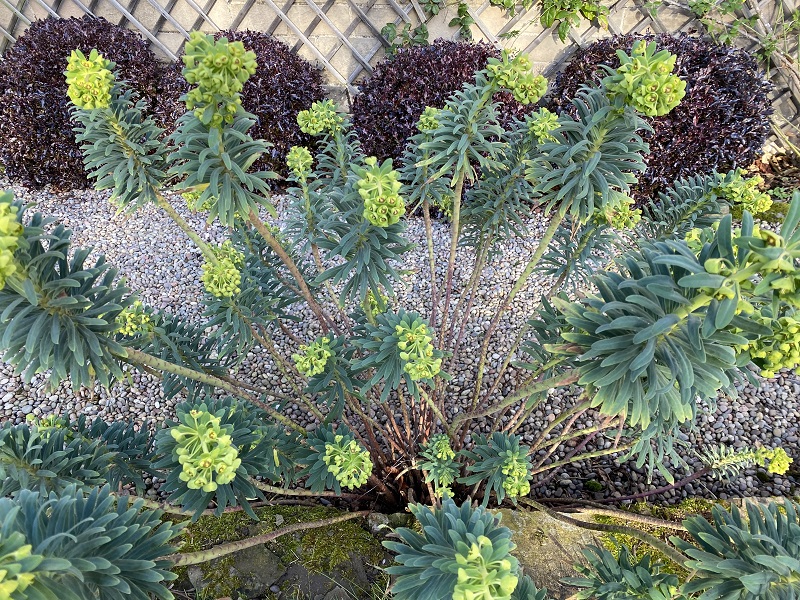 The last couple of days we have had wonderful cold, bright mornings with frost on the lawn and a thin covering of ice here and there. With the pond almost free of the usual duck weed, and the water lilies not having started to show their leaves, the early morning sun provided this nice reflection of the cloud pruned conifer. 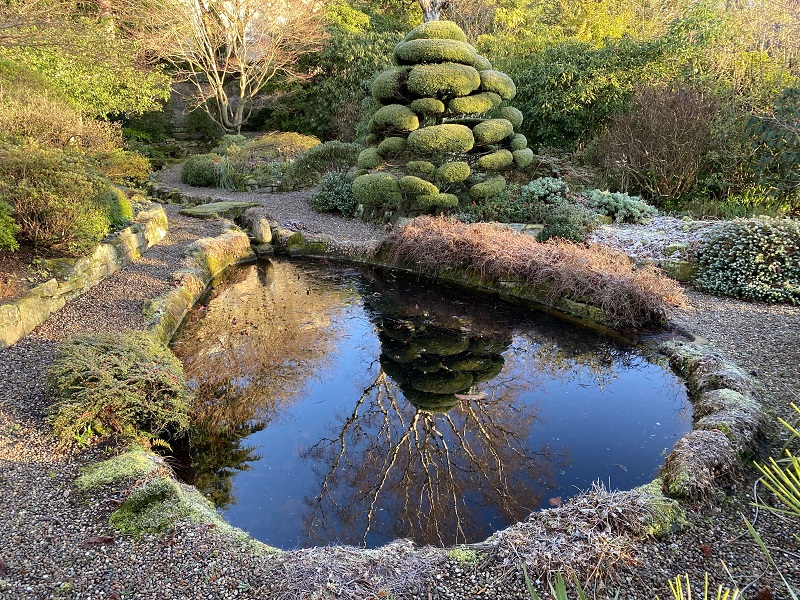 It is great to hear from Julie that there are plenty of new members of the Caley. So if some photos and comments look a bit familiar to anyone who has read this blog since I started it in January 2019, to others they might be fresh news. I would like to thank Julie for posting the blog on the website and always making it look good.

We are already on our way to the garden opening.  The dates are Saturday and Sunday 14th and 15th May, 2pm – 5pm.  We are having what promises to be a bumper plant sale thanks to Caroline Pearson and Vicki Reid-Thomas. New this year is the addition of a brass band. The No Strings Attached Orchestra will play here at Redcroft on the Saturday, and our next door neighbours, Edward and Maryla Green are going to open their garden at Innerwick with us, same days, same times. This is the first time they have opened it and it will be a great addition.  We welcome all children, buggies etc and dogs on leads and hope members of the Caley will support us.  More information on the Scotland’s Gardens Scheme website. 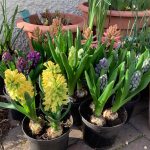 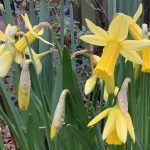