Thursday – a day of two halves!

In the morning it was mild and bright with a buzzard circling overhead, but rain was anticipated in the afternoon so the team hurried on with the day’s tasks. There has now been frost on the plot so it was time to take out the tomatoes and runner beans.

Weeding continued on the leaf mould heap; daffodil bulbs were planted along the edge of the willow patch, and the area around the strawberry bed cleared as it had become overgrown with alpine strawberries – a pretty plant with tiny flavoursome fruit but it does spread, in this case too much. The mint in the herb bed and at the apple trees had taken over so that was cleared. The plants will be put in pots to restrain the spread and planted out again.  Tom’s bed, where he grows exhibition veg, was weeded and forked over. And then the rain came on so that was it for the day.

The Autumn raspberries are poor and slow in ripening this year so the photograph shows what the team should be picking and will again!

Jobs for next week: Weed round the hazels. Top up the paths with wood chips; Continue the weeding 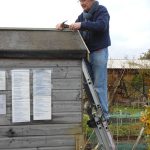 The last Thursday in October on the allotmentAllotment