As the daffodils fade, tulips take over. Most tulips do not naturalise as well as daffodils as they originate in areas such as central Asia which do not have our damp climate. The scarce Tulipa sylvestris is often said to be native to Britain but, like snowdrops, is a long-established introduction from further east. Tulips do best in well-drained soil in full sun, sheltered from strong winds.  They are effective in containers but make sure the size of the tulip is in proportion to the planter!  Bedding tulips are best replaced each year. If left in the ground, they are unlikely to flower so well in later years. Dwarf species tulips, such as the early multiheaded Tulipa turkestanica, the Tulipa humilis group, the later T. tarda, forms of the slender lady tulip T. clusiana and forms such as ‘Little Beauty’ are often genuinely perennial. 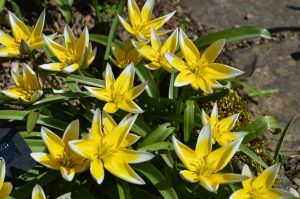 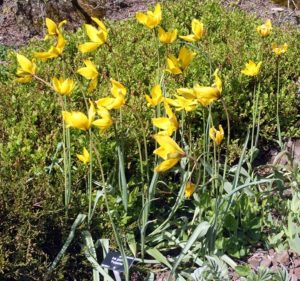 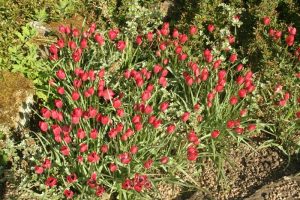 The short-stemmed cultivars of Tulipa kaufmanniana and T. greigii often re-flower without lifting if they are in a warm sunny place.  Kaufmanniana are sometimes called water lily tulips and one variety is called ‘Water Lily’.  The slightly later greigii group often have attractively marked leaves such as the well-known ‘Red Riding Hood’ or the new and extraordinarily marked ‘Fire of Love’. The fosteriana tulips include ‘Red Emperor’, which has one of the biggest flowers of any tulip. 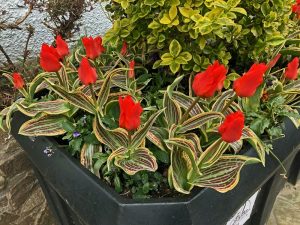 There are 15 main types of tulip. Crossing fosteriana tulips with single varieties led to the   Darwin hybrids such as the well-known red ‘Apeldoorn’, which make excellent tall bedding tulips.  Also good in formal beds or planters are the lily flowered tulips with their distinctive pointed petals; the yellow ‘West Point’ and the pale pink and white ‘Marilyn’ are good examples. Many tulips are classed by when they flower.  Single earlies e.g. ‘Keizerskroon’ are followed by mid-season (triumph) tulips, a big group with many good varieties from the dark ‘Abu Hassan’ to the pale ‘Zurel’. 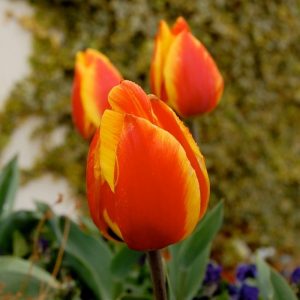 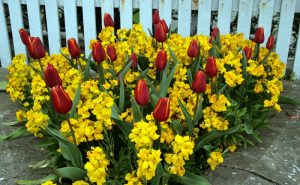 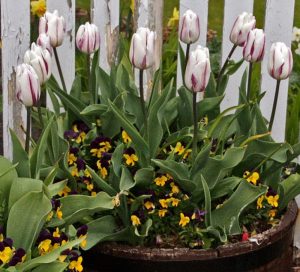 Then come single lates, such as the very popular, almost black, ‘Queen of the Night’. Double earlies are quite short such as the old classic ‘Peach Blossom’. Double lates (peony flowered) include ‘Black Hero’, a sport from Queen of the Night and the pale Belicia.  Fringed tulips have obvious edges to their petals while parrots have twisted flowers which can fall over due to their size.  Viridiflora have green marks in their petals.   Rembrandt tulips are modern, virus free bulbs that recall the ‘flames and feathers’ of extinct varieties, now known to be infected by a virus, which were much sought after during the Dutch 17th century tulip mania.  Some tulips can be in more than one section in bulb catalogues. The double early ‘Monsella’ and triumph ‘Helmar’ are also sometimes offered as Rembrandts. 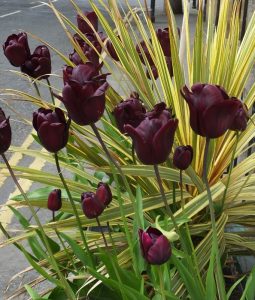 Tulipa ‘Queen of the Night’ 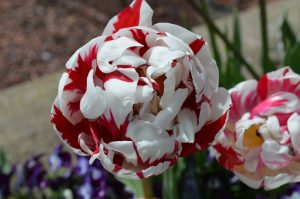 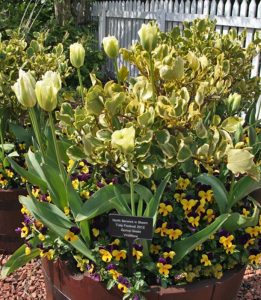 The alternative to discarding old bulbs is to lift and dry the tulip bulbs after flowering. If the bulb is smaller or has split into small bulblets you will not get good flowers unless you grow these on, perhaps lined out in a vegetable plot.  Use old bulbs in your less important borders and new bulbs for containers and other key sites. Now is a good time to evaluate your display and plan for 2022. As tulips are below ground for much of the winter, they need companion plants. Wallflower are a traditional choice and provide a striking show in spring as well as scent. Other options are violas or pansies, which work well in containers, forget-me-nots and ornamental daisies. Tulip bulbs are often planted as late as November to reduce the risk of a Botrytis disease called Tulip Fire. 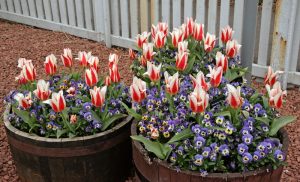 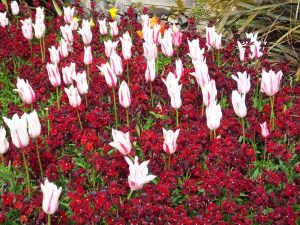 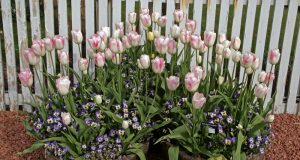 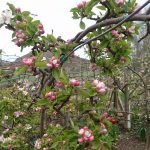 Still chilly on the AllotmentAllotment, Blog 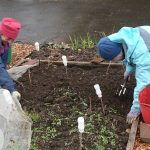 Getting busy on the AllotmentAllotment, Blog